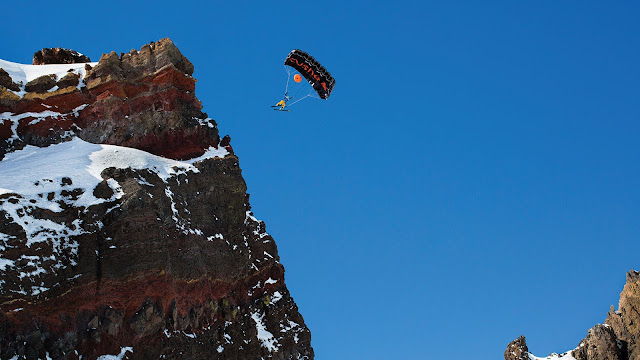 The documentary “Super Frenchie” would not normally be a film I would review. Why? Not because of the film itself or the category, it’s because I have a fear of heights (in certain circumstances).


The film follows the career of one Matthis Giraud who is a ski base jumper. Throughout his life he went from extreme sport to extreme sport culminating in skiing down some of the most treacherous areas in the world and base jumping - all at the same time.


Matthias is a captivating personality. HIs passion for what he does is infectious and it helps because one might think you’d have to be insane to do what he does. His wife (and eventual son) understands this drive in him as she explains in the film. Once they become parents, her view on his career changes slightly but also she knows her husband well. And that ski base jumping is a part of who he is.


The footage is spectacular that they got for the film. It wasn’t nearly as cringy for someone like me as I thought it would be with only a few exceptions.


There is a dramatic turn in the film which you’ll have to watch as there are no spoilers here.


“Super Frenchy” was inspiring in terms of getting the most out of life no matter what your pursuits are. It also reminded me that some people are just wired differently and that’s not a bad thing at all.