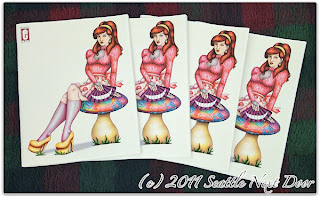 Come and get 'em!
Mark

Posted by Eclectic Arts at 8:14 PM No comments: Links to this post

Greetings,
Thank you for your inquiry.  Ordering information is below:
$5 US post paid for each copy in the lower 48 states (more if in Hawaii or Alaska)
Outside the US:  depends on where you are located (for postage reasons) - let me know your country.
Money order or well concealed cash (sent at your own risk) to:
Eclectic Arts
C/O  Mark Sugiyama
8204 242 ST SW
Unit D
Edmonds, WA  98026-9131
Please specify which issue you are ordering:  #1 or #2.
Combo deal of #1 and #2 for only $8 post paid.  Save two dollars!
Payment can also be made through PayPal!
Use:  mark@seattlenextdoor.com for PayPal payments.  Mark payment as a "Gift" please!
Thank you so much for your support!
Regards,
Mark Sugiyama
Eclectic Arts
EclecticArtsZine@gmail.com
Posted by Eclectic Arts at 10:54 PM No comments: Links to this post

Well, the test printing at least...but, hey, I'm excited to see it!  A few more color pages in Issue #2 as well!

Onward!
Posted by Eclectic Arts at 9:17 PM No comments: Links to this post

I actually created this blog in November 2010, right about when the idea for the zine took shape.  The first posts were written prematurely so they have been deleted and I've decided to start anew.

Initially, I was thinking of having both a print and a web zine.  This may take shape further down the road but for the time being, this blog will serve as the web presence for Eclectic Arts.

Right now, we're nearing the finish line in terms of content.  The layout and printing of the first issue still remain.  With any luck, this thing will see the light of day mid March 2011.  In reality that's not a bad timeline at all considering back in October, this zine wasn't even an idea!  Everything fell into place rather quickly.

Also, more and more ideas came to me so that delayed the eventual printing of the zine.  As I sit here and type this, I am trying to juggle the first issue as well as some interviews for the 2nd issue.  It's an exciting time and I'm really looking forward to the finished product!

This process has taught me a few things:

1.  Persistence pays off.
2.  Being prepared (even overly so) pays off.
3.  It's never too late to start a new project if you're passionate about it.

It's rather ironic to me that the creative endeavor that I haven't spent any time with over the past 5 + years, is the one that is now at the forefront of what I do between music, writing, and photography.  Some of you that eventually read and hopefully enjoy the zine will know me only through that medium.  Whereas others have known me either through Seattle Next Door (my photography) or possibly through my days in the metal underground which stems back to the 80's.

Creativity is the key to my existence.  In small doses or large ones, I need it, like a drug.  In a good way.

-Mark
Posted by Eclectic Arts at 8:05 PM No comments: Links to this post