I find myself playing catchup after a productive week and weekend.  I'm on my way to experience Nightwish and Delain tomorrow (which will have a gig review) so I thought I best get this review up prior to the Fins and Dutch infiltrating my mind on Sunday evening.

For those that follow EA, you already know I've written two pieces on the local Seattle band Bleachbear.  One was a gig/contest review and the other was a CD review.  Find them here:

For my third piece, I conducted an interview this past Thursday 4/23/15 with the band prior to their gig.  Find the interview here:

Of course this means this is the gig review.  Onward!

The gig was held at the Funhouse Lounge at El Corazon (the new home for the formerly defunct Funhouse) on Thursday evening.  For those that know the club, the Funhouse now run the lounge side of El Corazon.  Being an all ages show, they had the bar sectioned off and the main area open.

I was conducting the interview with the band as the first band took the stage so I only saw half of their set.  The Female Fiends are a four piece from Kent, WA.  They played a really enjoyable mix of alternative with some guitar work that reminded me a bit of bands like The Cure but without the Robert Smith mopey vocals.

Their songs were well written and they were a good start to the evening.  You can find them on FB and Band Camp.

The Female Fiends on Band Camp

Next up was Kathleen Parrish - who I understand organized this gig.  Kudos to you Kathleen for doing this!

A four piece with Kathleen Parrish as the front woman, it's really hard to describe their music.  It reminded me at times of like a mix of indie with adult contemporary tones (especially the vocal delivery).  That description isn't on the mark but it's all I can think of right now.  Backed by a band of guitar, keys, and drums, Kathleen performed a set of tunes that showcased her vocals and songwriting.  While different than The Female Fiends, she was equally enjoyable.  Plus she's from Edmonds (my current residence) so she gets extra points for that!

They have a gig coming up in May at the Firewheel Coffeehouse in Everett.  Check the official site for more information.

You can find Kathleen Parrish here: 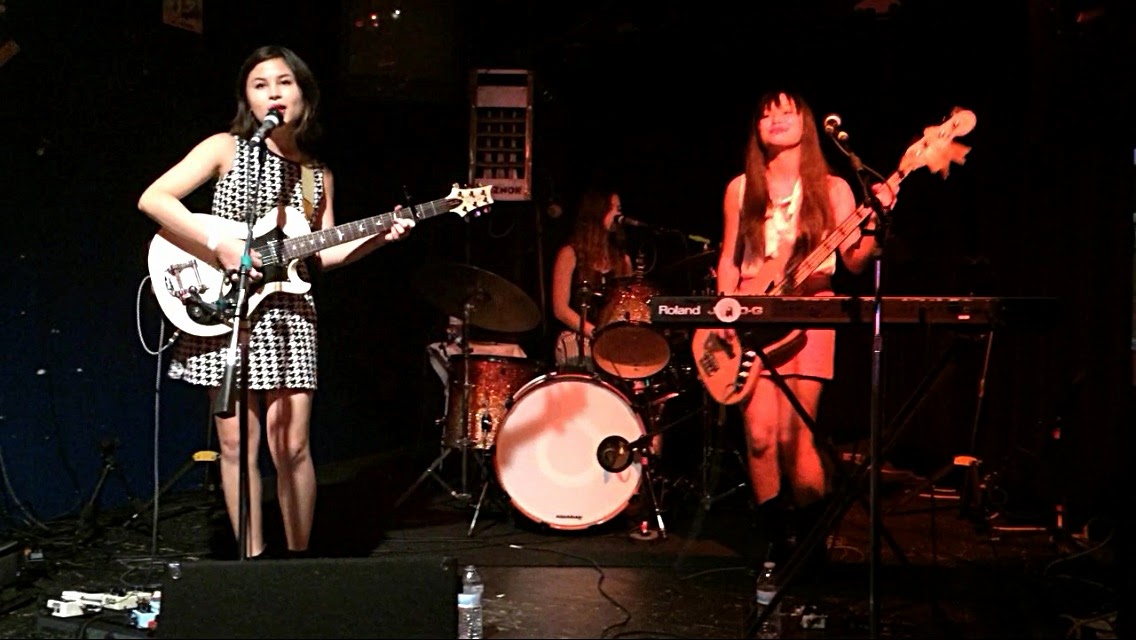 The last band of the evening was Bleachbear.  After some issues with Tigerlily's (vocals/guitar) pedalboard, the band played about a half hour set of original tunes - a few I recognized from the SoundOff performance.

The band was in fine form - the mix was a little off (especially with the background vocals - sound guy could of punched those up a bit more) but overall, the band sounded really tight.  And I need to point this out - Emiko (bass/keys/background vocals) really stood out.  I didn't notice in March just how much the bass is pumping all over the place - even with the solo bit in one tune.  Some artists come out of their shell when they hit the stage - Emiko is one of them.  She has her own vibe on stage - dancing and swaying to the music while bopping around the neck on the bass.  Impressive!  And thank you for playing bass with your fingers - (pet peeve of mine when I see a bassist using a pick).

Bird (drums/percussion/backing vocals) seems to have grown a bit as well.  Her drumming tonight was playful but more on point than in March.  Playing her own kit may have helped with that instead of having to use a backline kit (like at the EMP gig).

Tigerlily's made the best of one effects pedal in her arsenal and it really wasn't noticeable from an audience standpoint.  Singing and playing while dancing to the songs, she was definitely more at ease at this gig and it showed.

The band as a whole seemed in sync, more focused as a musical unit, and it made me eager to hear this new EP and how their sound has evolved.

My only complaint?  The set was short.  I guess I'm not up on these all ages type gigs - I think every band got the same amount of time to play to make it fair (correct me if I'm wrong).  I'm used to the normal set times:

Oh - and my other complaint - the red lights the Funhouse/El Corazon uses on the right side and rear.  Emiko and Bird were bathed in red light the whole set while Tigerlily had the white spotlight on her.  Clean that up Funhouse people - or at least mix it up a bit.

By the time you're reading this, the band have a gig on Sunday 4/26/15 at the Crocodile so catch them if you can.

In May they are playing at the Folk Life Fest (they're scheduled for Saturday the 23rd - time/location TBD - schedule comes out online on May 1st).

Keep up with the band here:

A very pleasant night of music by all three artists!

Mark
EA
Posted by Eclectic Arts at 10:00 PM No comments:

Posted by Eclectic Arts at 8:54 PM No comments:

EA has finally entered the 21st century - aka video interviews.  Up first:  Doyle Wolfgang Von Frankenstein.  Check it out!

Posted by Eclectic Arts at 9:17 PM No comments: