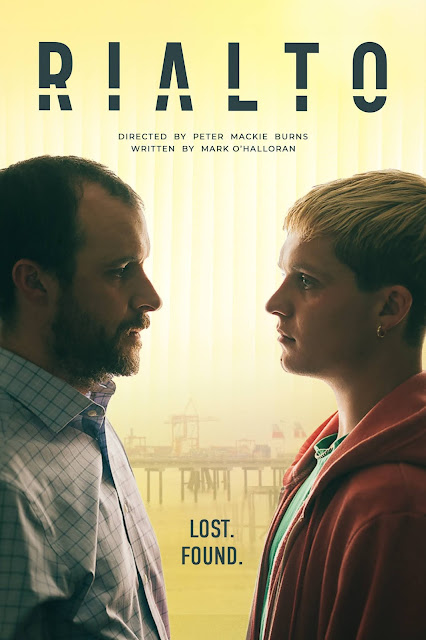 (Breaking Glass Pictures)
The downfall of a person is never easy to watch, in film or in real life. In the film, “Rialto”, we watch a man lost, directionless, always saying “sorry” to the people in his life, and searching for acceptance in the most unlikely place.


Colm (played brilliantly by Tom Vaughan-Lawlor) is a 46 year old man, husband, and father. Working a good job at the docks since he was sixteen years old, his life has stagnated. The death of his father (who wasn’t the best role model), his mother grieving, and his sister distant, Colm finds solace in the arms of 19 year old Jay (played by Tom Glynn-Carney), a young lad that works as a male prostitute.


Colm can’t bring himself to tell his wife, who is forced to watch her husband disintegrate for reasons unknown to her. His relationship with his daughter is strong but his son has grown spiteful of his old man. 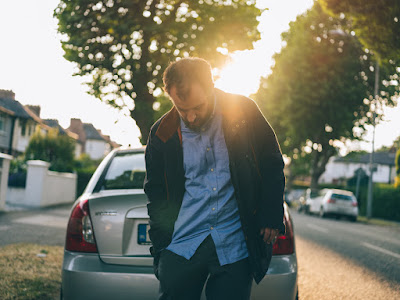 (Courtesy Breaking Glass Pictures)
“Rialto” is an exchange of services but there is much more meaning to the title within the context of the film. Colm clearly has something missing in his life, a void that he can’t seem to fill. Instead of confiding in his wife about where his head is at, he pushes her away. Jay is a neutral third party, someone he can talk to, even though it’s strictly business for Jay.


The film is compelling from beginning to end. Tom Vaughan-Lawlor is so lost in the character of Colm, it is just amazing to watch as his character struggles from scene to scene to make sense of his life and his choices. An exceptional performance.


Tom Glynn-Carney also gives a top notch performance as Jay. He is the average young man trying to make things right with his girlfriend and their baby. He has no support system so he does what he can to survive. But, he also shows compassion and understanding to Colm, as a provider of services.


“Rialto” is a film that tackles an intense subject with courage and leaves the audience ready to discuss it once the lights go up. 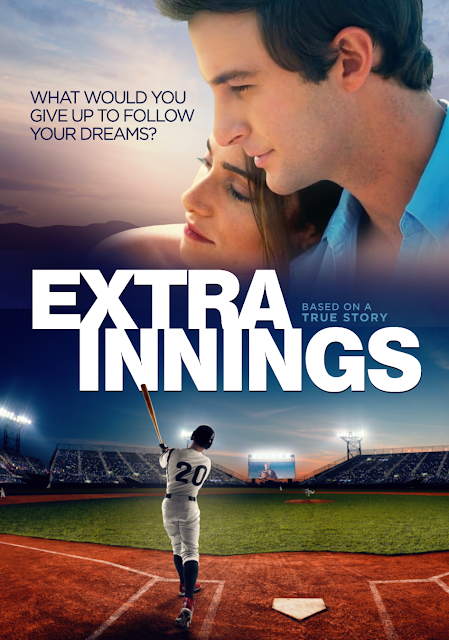 I love a good sports based film. I think in 2020, with the professional sports world modified due to the pandemic, releasing a film about baseball is more than good timing.


“Extra Innings” is a film based on true events. David Sabah is from a devout Syrian Jewish family. He has three siblings - Morris who has health issues (diagnosed with schizophrenia), Vivian who is very much the black sheep of the family, and Rita his other sister that follows the family values.


David is torn between his love for baseball and his family’s expectations. This theme runs throughout the film and is easily identifiable for many viewers who can relate to his struggle.

Directed and written by Albert Dabah (he also plays David’s father in the film), the film is very much a drama with baseball the secondary theme. The storytelling is right on point and this could easily be a play. I enjoyed the exploration of themes within the family dynamic and how David copes with them.


The performances from all of the cast members were a highlight for sure. No weak links whatsoever.


With all that it has going for it, I do have to say I found the film a bit of a downer. Tragedy strikes David’s family not once, but twice. The lack of support from his family to pursue his baseball dreams (other than Vivian) weighs down the narrative to a point where it becomes sad.


The ending seemed very forced. I think a few scenes depicting the family members coming to terms with their son's aspirations would have helped with the build up to the last scene in the film.


“Extra Innings” is definitely done well, don’t get me wrong. I just went into it thinking it was going to be a feel good film and instead it is a serious drama about a young man’s life, tragedy, and his struggles to find acceptance within his family. 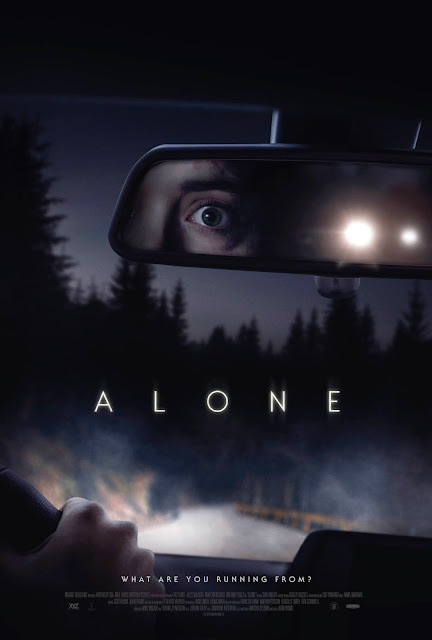 The premise of thriller, “Alone” sounds familiar but the story takes turns that are unique. A widow has her U-Haul packed up and is moving. She is harassed by a stranger on her journey who eventually kidnaps her and holds her in a remote cabin in the woods of the Pacific Northwest.


The story is really a two character play. Jessica (played by Jules Willcox) and her captor (played by Marc Menchaca). A disturbing game of cat and mouse that, without giving things away, expands far beyond the plot.


I was hooked by the film from the get go. The plot twists were very effective and kept things from venturing into familiar thriller territory. When I expected certain things to happen, they didn’t, which pleasantly surprised me.

Jules Willcox put on a multi-layered performance. From the grieving widow, she displayed vulnerability, sadness, but with realism and caution. When Marc’s character approaches her vehicle to apologize for his earlier car antics, she is not naive and welcoming. Her guard is up and it just adds to the impact when she eventually awakens in the basement of his cabin. She also shows her will and determination to survive throughout the film. Her captivating performance can be added to the list of strong female characters in cinema.


Marc Menchaca also creates a character that is creepy but not overly so. His background in the film (no spoilers) just adds to the unnerving quality of his character. The old adage your hero is only as strong as your villain definitely applies here. Marc goes toe to toe with Jules and this is where “Alone” sets itself apart from the average thriller.

(Jules Willcox in ALONE, a Magnet release. Photo courtesy of Magnet Releasing.)
The screenplay is smart. Several times I thought to myself, “why doesn’t the character do this” and then two seconds later, the character did exactly what made sense to me.


Overall, “Alone” is a thriller that will entertain the audience from start to finish. Recommended. 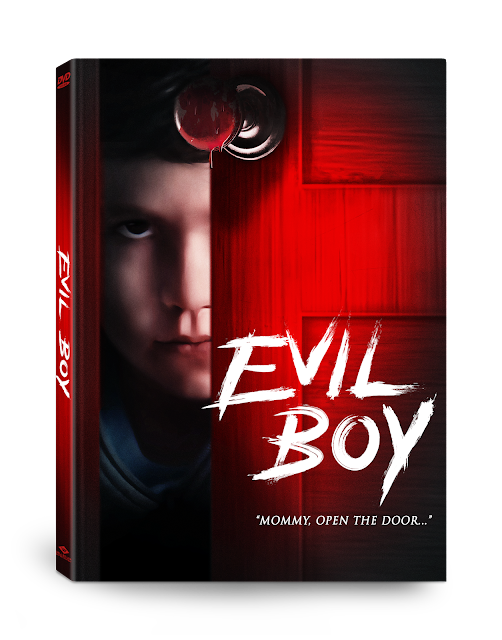 The use of children and religious elements has been a common theme in horror films over the years. “Evil Boy” is more than the title would lead one to believe.


A couple have been grieving over the loss of their son who was actually never found. They look into fostering or adopting another child from an orphanage. The child is unusual to say the least and the story unfolds from there.


The suspension of disbelief comes into play as one would wonder why the couple (the wife in particular) would want to adopt this particular child when the orphanage is full of other children that don’t display odd behaviors. But, as you watch the film, you’ll begin to understand why she gravitates toward this child. The husband is more realistic which was refreshing for a change. But, eventually, the roles switch between his wife not wanting to be left alone with the child and the husband getting attached to him. 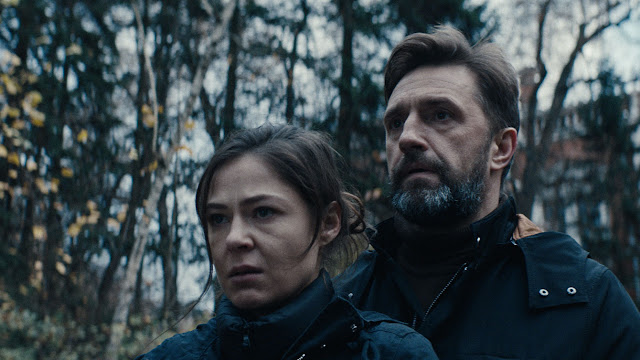 “Evil Boy” has it’s creepy moments for sure. The CGI works for the most part (except for two moments where it looked very rushed) and the boy/child actor (played by two different actors) was very good.


The realism from the couple added to the emotional weight of the film which, again, was nice to see. I was ready for the head in the sand type of couple but that’s not the case here for the most part.


The reasoning behind the connection between the boy and the couple adds a layer that makes it more believable than how the film starts out. I think the title “Evil Boy” is more like a translation - when it could use a better title that isn’t so obvious. 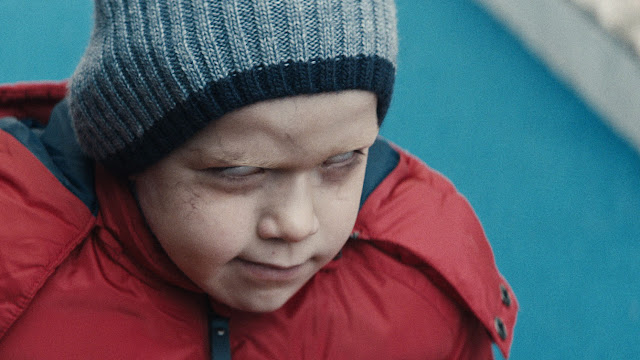 Overall, not a bad entry into the child/religion horror arena.

Posted by Eclectic Arts at 5:08 PM No comments: 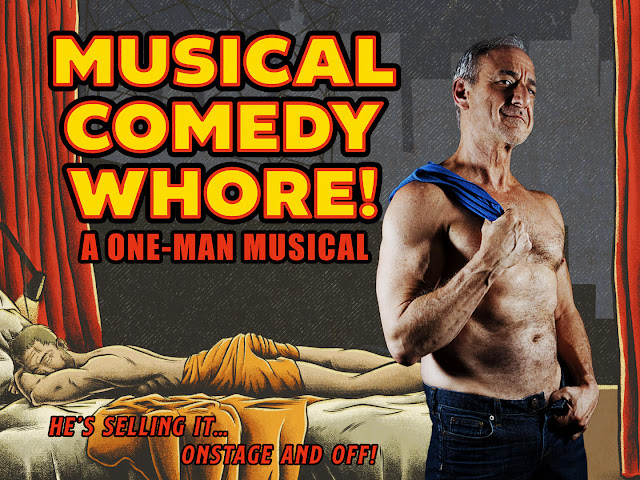 The one person show is always an interesting exploration for the artist. In this case David Pevsner lets it all hang out with his personal story of identity as a gay youth, as an openly gay man, and his theatre career over the years.


“Musical Comedy Whore” uses song and narration to tell Pevsner’s real-life stories about relationships, gay sex exploration, working as an escort to pay the bills, and his own self discovery of owning everything he has done in his past, good and bad.


The one person show was performed in front of a live audience and recorded as such. With only a piano accompaniment, the film is focused on Pevsner and he is a captivating performer and songwriter. 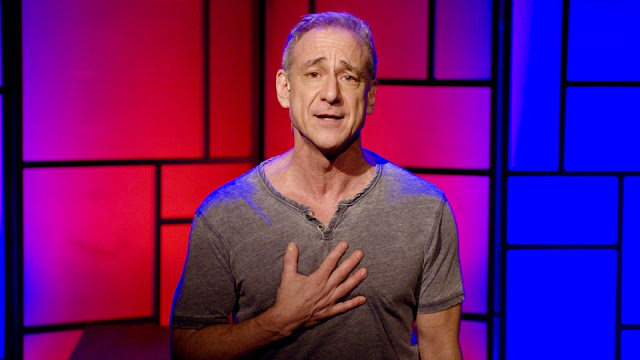 I chuckled at parts but I did not find it overly funny. If anything, I found it an interesting airing of a performer's ups and downs over his personal life and career. Sex is brought up time and time again but it serves a purpose - of Pevsner trying to find and even justify his body image issues when he was younger, and the power of sexual control.


I admire any artist that can put together a one person show like this that is raw and entertaining at the same time. “Musical Comedy Whore” may not be for everybody but it is a well done performance. 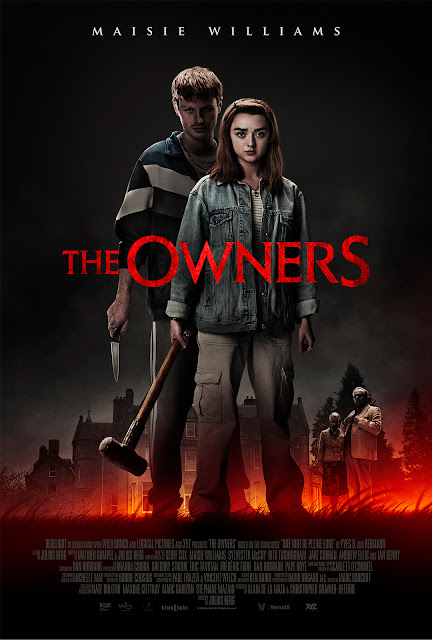 “The Owners” starts off innocently enough. An elderly British couple, a group of young thieves looking to make an easy score, and a safe inside the home of the couple. What transpires goes from bad to worse for the young thieves as a wicked game of cat and mouse erupts in this well done thriller.


There are absolutely distinct horror elements to this film. The graininess and the suffocating feel as the characters descend further and further into the trap of the elderly couple is sickening to watch (in a good way). 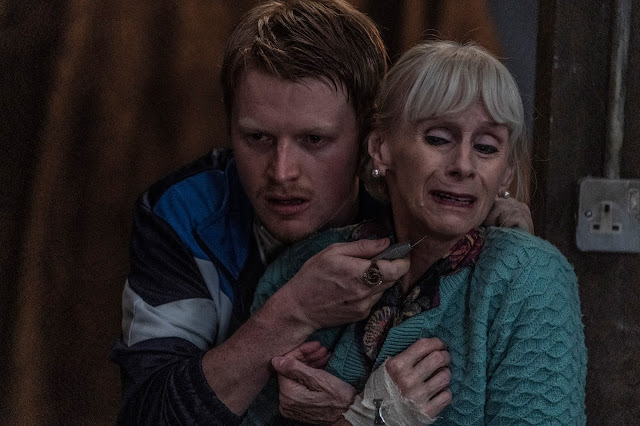 ((L-R) Ian Kenny as Nathan and Rita Tushingham as Ellen Huggins in the thriller, THE OWNERS, a RLJE Films release. Photo courtesy of RLJE Films.)

The performances of Sylvester McCoy (Dr. Huggins) and Rita Tushingham (Ellen Huggins) are marvelous. As master actors they bring nuanced yet brilliantly evil tidings to the proceedings from start to finish.


Maisie Williams (Mary) plays the heroine that is innocent yet tough in the film. Known for her work in “Game of Thrones”, Maisie keeps the back and forth between good and evil front and center.


The ending and the epilogue were delightfully eerie reminders that familiar elements in a film can still yield creative and interesting results. 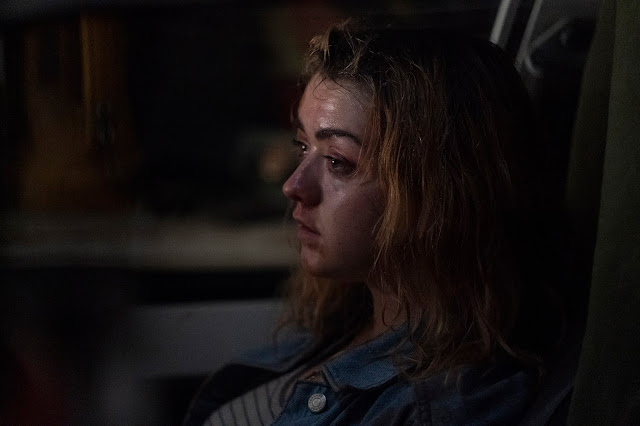 (Maisie Williams as Mary in the thriller, THE OWNERS, a RLJE Films release. Photo courtesy of RLJE Films.)

“The Owners” hits many of the right buttons for a thriller/horror film. I’m not too keen on the title (based on a graphic novel) but the film itself definitely entertains and that’s what’s important.