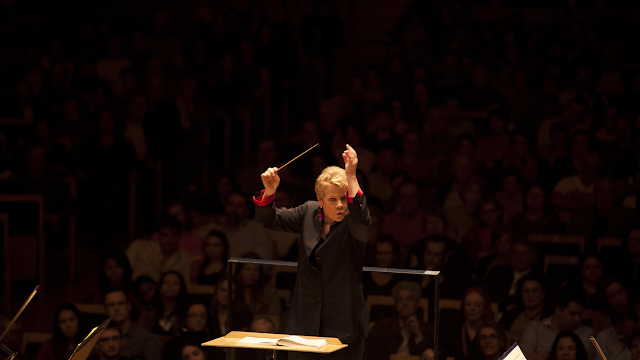 The new documentary “The Conductor” is a fascinating look at maestro Marin Alsop. A protege of Leonard Bernstein, she was the first woman to conduct a major US symphony - ever.


The film depicts her humble beginnings, born to two professional musicians. As an only child, Marin followed in her parents musical footsteps.


Her struggle to be accepted into graduate programs for conducting is headshaking. The backlash from some of the musicians she was working with (and their union) is also eye opening. Whether intentional or not, Marin Alsop became a leader and pioneer in the classical world.


Her story is as relevant today as ever. It is so disappointing to see the bias, the good old boys club patriarchy, and the other assorted bullshit she had to endure to get to where she is today.


But what’s absolutely lovely about all of this is that maestro Alsop doesn’t let those experiences cloud her judgement. Instead, she is a positive force for women, for young aspiring conductors of all races and genders, and continues her fight to include more females in the professional conducting world wherever she can.


If you’re not inspired by her story, then perhaps, you’re part of the problem.