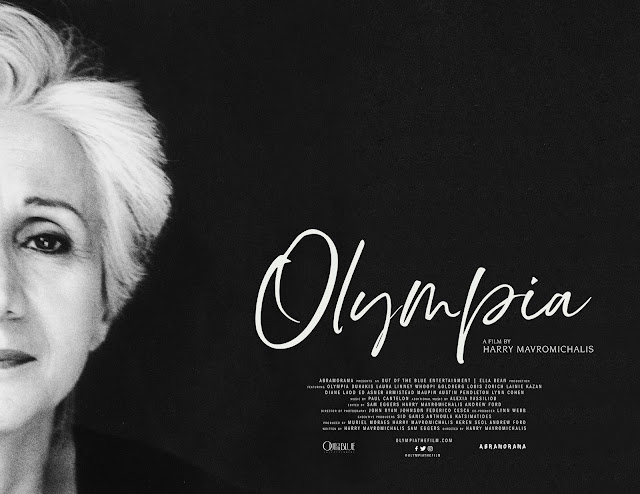 Greetings,
I am always grateful any time an artist takes the time to do an interview with me.  Written, phone, in-person (hopefully this will be an option again soon), and now virtually.  From a few written sentences to hours in the virtual studio and everything in-between, this thing called Eclectic Arts has afforded me more opportunities than I could have ever imagined.
The documentary about the Academy Award winning stage and screen legend Olympia Dukakis, "Olympia" - is now available on Apple TV and On Demand.  Below Ms. Dukakis took a few minutes to answer my press questions.

Eclectic Arts: With the documentary of your life and career, “Olympia”, you openly discuss your feelings from your childhood years to your early adult years of never fitting in. As a fencer at Boston University and getting denied parts in theatre as you were deemed too ethnic as examples. You eventually started your own theatre company to do the plays and parts you wanted to do. Do you feel looking back that you ever fit into the theatre system in the tri-state area or the film system in Hollywood? (why or why not)

Olympia Dukakis:
It's extremely difficult to shake off the feeling of not belonging when you spent your childhood and early adult life feeling just that. I remember the very first time I felt I belonged was when I had my first child. I felt a connection to other women. Theatre and film came later but they did come. Once I was able to stand my ground as an actor, things started shifting. Of course Moonstruck changed a lot. I felt I finally arrived to the family party.

Eclectic Arts: There is a scene in the film when you are teaching a workshop or class where you tell the actor (that is off camera) that they’re in the basement of a room on such and such a street. You are trying to get them to basically go for it and stop being so timid (for lack of a better word) on stage. Having taught many students at NYU - what do you want up and coming actors to know to help them excel at the craft of acting?

Be true to yourself.

Bring your own unique self to the character.

Go out and create work for yourself.

Eclectic Arts: Throughout the documentary there are moments of great levity with family and friends but also a sharp directness where you are calling a spade a fucking spade. In 2021 - what are your thoughts on female empowerment, equity, and diverse populations such as the LGBTQ+ community?

My thoughts on all of these important issues are exactly the same as they were 40 years ago. A functioning society needs equality. There is enough pie to go around. The idea that if someone else gets a piece of the pie, it will affect how much I will get, is a marketing tool of the ruling class. The first step is to recognize that we don’t have equality and then to go out and change the system so it protects everyone. I’m thrilled with the strives that we have achieved so far but we are far from having equality.
Thank you so much for taking the time, Ms. Dukakis.
Learn more about the film here:
OLYMPIA THE FILM OFFICIAL SITE
Best,
Mark Sugiyama
Eclectic Arts
Connect with Eclectic Arts here:   Social Media Links Here
"OLYMPIA" TRAILER
Posted by Eclectic Arts at 2:36 PM