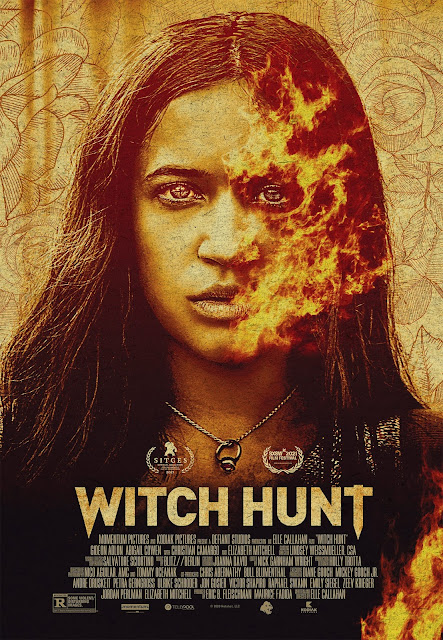 The new film “Witch Hunt” is an interesting take on a very familiar subject - witchcraft. Instead of going back into yesteryear or turning up the horror element, we get a modern day tale mixed in with some current events that yields creative results.


Perhaps one of the most misunderstood groups, witches can be many things - not just the lady in black with the pointy hat riding a broomstick. “Witch Hunt” attempts to show the empathetic side of witchery as well as the powerful side.


At times the juxtaposition of not belonging reminded me a little bit of the mutants from X-Men - where society shuns them because they don’t understand them. And eventually hunt them down - or in this case - burn them at the stake.

([L-R] Gideon Adlan as Claire and Abigail Cowen as Fiona in the thriller/horror film, WITCH HUNT, a Momentum Pictures release. Photo courtesy of Momentum Pictures.)
Instead of going through the plot, I feel it’s better for the viewer to take in the film with little knowledge beforehand.


There are obvious and not so obvious parallels to what’s been in the news over the last few years. This may turn off some viewers but to me, it was a creative take on a very real issue.


The creatives behind “Witch Hunt” did what I really admire - they did the most they could with what they had. The special effects were a bit rough in the opening scene but other than that, they maximized their budget and produced an enjoyable tale of modern day witchcraft.