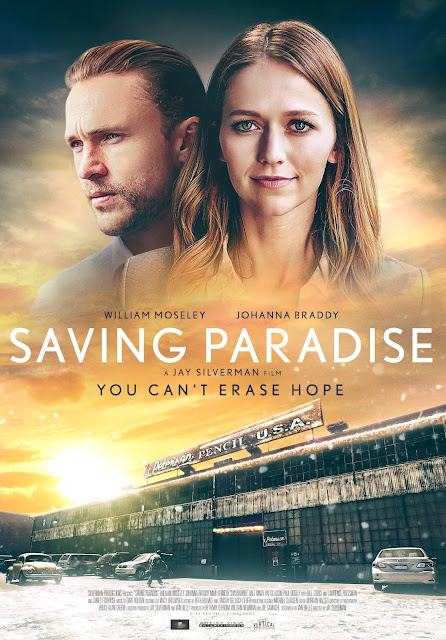 
The new film “Saving Paradise” is a feel good film that crosses through familiar territory. A small town (now) lawyer named Michael (William Moseley), now living in the big city, goes back home to handle the affairs of his family’s dying business.


The pencil factory business is one of the last big companies left in the small town, meaning if it closes hundreds will be without a job. The guilt complex is big here as Michael did everything he could to “escape” from the small town. But, he finds himself at a crossroads about the future of the company and his own life choices.


“Saving Paradise” is an enjoyable film. The long lost love interest Charlie (Johanna Braddy) really shines in her role as the local administrator at the company that won’t go down without a fight.


I wish the lead Michael Moseley would have shown more heart toward the second half of the film. His performance is very muted and one note. For the first half, it makes sense as he is portraying the cold hearted lawyer who doesn’t want to deal with his family’s small town business. But when things take a turn in the second half, I found it hard to believe his character was genuinely fighting for the business. A small quibble.


Overall, “Saving Paradise” is a worthwhile viewing and it certainly shows how David can overcome Goliath.