APACHE JUNCTION arrives in Theaters, On Demand and Digital on September 24, 2021. 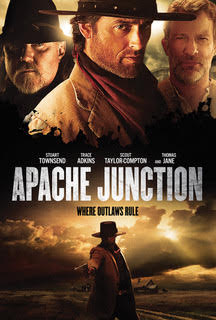 The new film “Apache Junction” is set in the old west as a big city reporter goes to the far reaches of the city to write a report on it. She becomes a target soon after she arrives. A gunslinger, Jericho Ford, comes to her rescue and the story goes on from there.


There are recognizable names in the cast such as Scout Taylor-Compton and Trace Adkins. But even those talented artists can’t save this film. And I don’t blame them.


“Apache Junction” is poorly written and poorly executed. I couldn’t find much to write home about (no pun intended) as I watched scene after incredulous scene just waste the talents on the call sheet.


Granted, period pieces like a film set in the old west are always harder to pull off on a limited budget as quite frankly the sets, costumes, and other aspects will show. You can’t hide the shortcomings like you can in a modern day drama, for example.


I had moderate hopes for “Apache Junction” and even those weren’t met. Perhaps this film will resonate with other viewers.