Troop 491: The Adventures of the Muddy Lions 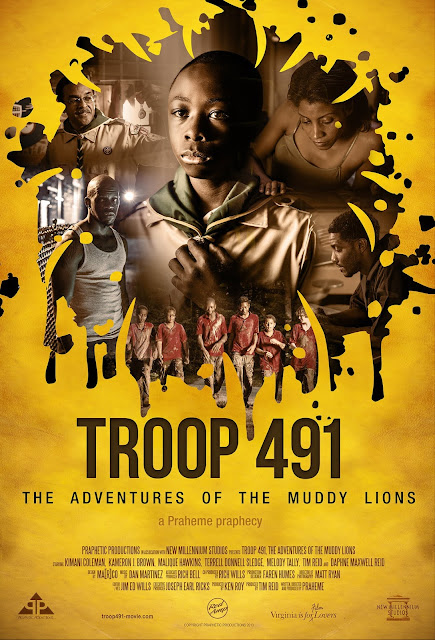 Every now and then I will review a film that has already been released (not an advance screener). I virtually met the director/writer/producer of this film Praheme while working with the band AL1CE on their recent virtual tour. I saw the trailer and was intrigued. After reviewing two films from my publicists lists, this film was on deck last night.


As a first time feature for Praheme, this film has many, many good things going for it. First and foremost - it was entertaining. I particularly enjoyed the interactions of the young middle school aged Scout members throughout the film. Their scenes are what made this film work for me. Working with child actors is always considered a no-no, particularly for your first film, but if you know what you’re doing, and can embrace the energy of the youth, your film will be all the better for it. Troop 491: The Adventures of the Muddy Lions is a clear example of this.


The juxtaposition between the dramatic elements involving Tristan and the Scout elements worked most of the time but not all. There were definitely scenes when the adult actors had soap box moments that didn’t sound natural to me. They were too forced. Having reviewed several dozen theatre productions now, I’m always looking at the actors performances in any given film with a more acute eye. The prison scenes for example - the dialogue was top notch - so I really wanted to see those lines carry the emotional weight that they needed and deserved. But, they came up short for me.


Having said that, the work of young Kimani Coleman was perfect for this film. Much was asked of this actor and for the most part he delivered. Not an easy task considering how much is going on in the screenplay.


The tone of the film overall, particularly with the Scout sequences and the young actors in any given scene, was really well done. It felt like a mix of films I had grown up watching in the 80’s and perhaps a more present day Disney film. The dark dramatic violent scenes were also real and authentic.


The subject matter of the Scouts was also refreshing. How many people out there think of Scout members that are Black? Instead of the token Black child actor we got the complete reverse in this film. It should also be noted that this film depicted many aspects of BIPOC - and did it in a very authentic way.


Troop 491: The Adventures of the Muddy Lions could easily be a great television series. Netflix if you’re reading this - jump on this concept now. It would be a game changer for you.


And for those reading this - check out the film as well. You’ll be entertained and educated all at the same time.