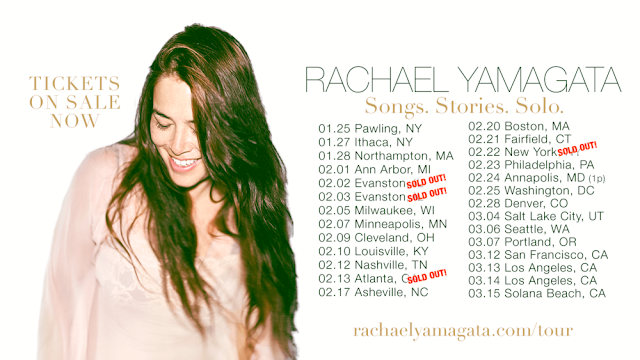 
I was fortunate enough to see Rachael Yamagata as a part of her friend Joshua Radin's summer tour last year. I was so impressed with her artistry that I knew if she ever came back to the Seattle area, I would want to see her perform again.


As fate would have it, Rachael announced a tour in December that would bring her, solo, to the Pacific Northwest again, this time to the historic Columbia City Theater in Seattle. I had previously interviewed and reviewed Vienna Teng at this very same venue so I knew it would be a perfect match for Rachael's music.


I drove down to Seattle on Tuesday evening. The theater is in an area of the south end of Seattle that has been gentrified over the years. I used to work in the south end so I am overly familiar with the area, good and bad.


Upon entering the main theater at 7pm, I came to an open empty space in front of the stage. Since I cover shows all over the city, I know that there's never a sure thing about seats at any given show, no matter what the style of music is. So, standing wasn't going to be too much of an issue for me but for other fans it certainly was. Chairs would have been a much-appreciated addition to the room (Vienna's show was set up this way so I know it can be done).


Around 8:15pm Hemming started her half hour set. A singer songwriter from Philly, PA, Hemming performed a strong set of songs with humorous banter in-between songs. She had mentioned she had played Seattle before opening for the late Chris Cornell at Benaroya Hall (home to the Seattle Symphony - arguably the best sounding hall in all of Washington state). Her set went over well with the appreciative audience.


After a very short break, the lights dimmed to blue, and Rachael appeared stage right through the curtains. The crowd applauded and vocalized their appreciation of Rachael as she made her way to the piano.


Playing in a very mood oriented atmosphere (the stage stayed bathed in blue for at least three songs before a bit of red was mixed into the lighting design as well as a montage of footage projected on the brick wall), Rachael played a set of songs that was very satisfying. She often joked about how every song she played was sad or was part of a breakup or something else that would make you sad - perhaps the truth is that through her painful experiences, the songs she writes resonates with so many people, male and female, because we've all been there, too.


She played songs from "Happenstance", "Elephants …", "Tightrope Walker", and "Chesapeake" to name a few albums. I remember personally being drawn to, "You Won't Let Me" last July so I was very happy to hear her perform it again.


Rachael switched between guitar and piano to accompany herself. Normally she tours with either a full band or at least another musician or two to round out the sound. She mentioned wanting to go out this time on her own and see if she could do it (she was open about her issues with stage fright and drinking before shows to calm her nerves) - and let me tell you folks - she more than capably did it. It was such an intimate way to see her perform that, if she's ok with it, I think her fans would love nothing more than to see her this way again - solo.


Her set finished with songs yelled out by the audience - and Rachael mentioned she would be back by the merch table to give out hugs and meet with fans.


I am always in awe of songwriters - especially those that pour such heart and emotion into their work. Rachael was inspiring on Tuesday evening in Seattle. As long as she keeps writing and performing, I know I will always be a fan. Thank you for sharing your artistry with us, Rachael.


Special Thanks: Peter for the credentials - I appreciate everything you did to get me approved for this show!