Here is my interview with Nigel Glockler of the mighty SAXON!  I've been a long time fan of both the band and Nigel's drumming.  I was super stoked when this opportunity came up to speak with Nigel.

This was conducted just prior to the band heading out on the North American tour with Judas Priest! 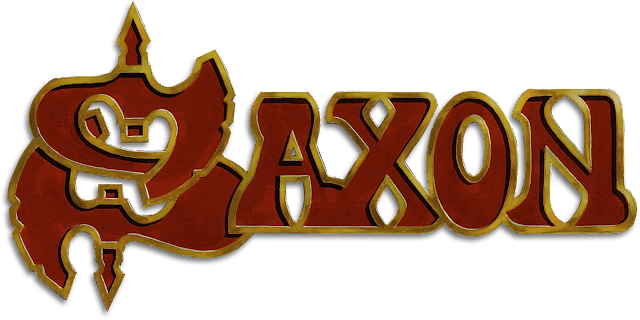 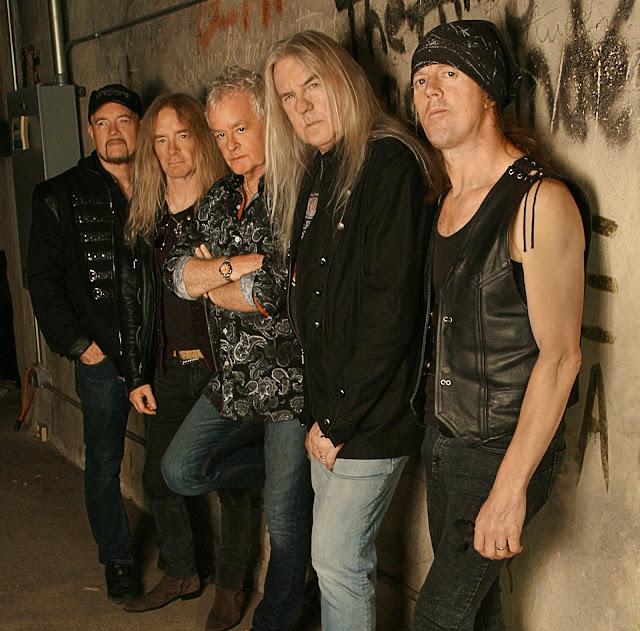 Eclectic Arts: Greetings Nigel! This is quite the honor for me having been a fan of Saxon, and specifically, your drumming, for many decades. How are you?

Nigel: I’m doing great thanks – just gearing up to leave for the tour, enjoying some Texas sun, before flying up to Philadelphia to check all the gear and head out on the road.


EA: Thank you for taking the time today to do this interview. As a little background - I saw you perform in Seattle, WA in 1983 (with Maiden), 1984 (as headliners), in 1986 (with Yngwie), and then in 2013 (as headliners) at Studio Seven. Before we dive into your new album, "Thunderbolt", and the upcoming U.S. Tour - can you tell me a bit about your current drum kit? What are you currently bashing on tour? (brands, details, etc)

NG: I’ve got two kits made by Duallist – a British company. One stays here in the US and the other is based in Europe. All the shells are maple and the sizes are as follows –

I use Canopus snare drums live – Brass, Zelkova, or an Alphonse Mouzon signature.

All the cymbals are Paiste – 17”, 18”, 19” Rude thin or Wild crashes, Danny Carey heavy ride or the Stewart Copeland one, 13” hats, 14” hats, Wild China, a Rude China, and a Signature series China, plus various bell cymbals, mini chinas, splashes, stackers etc. The set up varies between the US and Europe.

Pedals are Duallist, the hardware is either Gibraltar or DW – depending on which kit, and the sticks are by Wincent. I also use Cympads for under the cymbals and Protection Racket cases.


EA: What, if anything, have you had to change over the years to keep drumming at a high level? With drums being the most physically demanding instrument (outside of vocals), do you work out more to keep your body in shape? Maybe nothing has changed and you just go through your normal warm up routine before going on stage? Walk us through what you do to prepare before recording an album, going on tour, a show, etc.?

NG: I don’t do anything special to be quite honest – I walk a lot, swim, and, if there’s a sauna, hot tub, or pool in a hotel on a day off, that’s where you’ll find me!

Also steam rooms and massages are great too!

As for warming up prior to a show, or recording, I stretch my hands and fingers on a wall, use a practice pad – or a cushion – and that’s it! – that warms up the wrists, tendons, muscles etc. Plenty of rest is essential for a long tour as well.


EA: With the new album, "Thunderbolt", how did you approach your drum parts for the new album? Do you get input from anyone else in the band or are your parts "your" parts so to speak?

NG: We all work together on each others parts – obviously the influence has to come initially from the demo of each song, but, in the end, I put my own slant/style on it drumming-wise.


EA: I remember sitting in my parents basement, putting on "The Eagle Has Landed Live" album back in 1983 (it was the second album of Saxon's I ever bought - "Power and The Glory" being the first), looking at the live pictures on the back of the album and just being taken away to a venue in the UK or Europe as I listened to that album. And your picture was a profile picture behind the kit, sunglasses, and a headband tied on your head if I remember correctly. You had just joined the band for that tour - what can you tell me about your early days of joining Saxon and what those subsequent tours were like in the 80's?

NG: That was taken early on in that first tour – I was playing Pete Gill’s kit – a couple of weeks later I had a Tama kit. Later on I ended up with a Ludwig endorsement.

But back to that first tour – I had come from a very successful New Wave band called Toyah, but I was always and foremost, a rock drummer.

I’d never played live in Europe – usually it was one-off ‘playback’ shows for TV – just doing the singles etc. That first Saxon tour took me all over the place! – Ozzy Osbourne was our support act!- that is until he got pissed off and went home, without telling his band! I think we were on the road for three months. Then my first US tour – we flew to Minneapolis to support Molly Hatchet early in ’82 – there was a lot of snow on the ground!

We toured a lot in those days – it really was the ‘write, record, tour’ cycle!

As regards the headband etc, that was my thing – I’d been doing that since I was in bands at school. Andy Sneap (our producer) and I often have a joke about The Headband!

Later on, when I started wearing contact lenses on stage, it was essential to keep the sweat out of one’s eyes – that’s why I wear headwraps now.

EA: For many U.S. fans, "The Power and The Glory" was their first introduction to Saxon. To this day it's one of my favorite records - period. Your drumming on that album is so fantastic. What can you tell me about writing and recording your drum parts for that album?

NG: Thanks for that! – for me it was an extremely important album insofar as it was my first studio contribution for the band. Pete Gill was well liked by the Saxon fans so I had to impress! No pressure then!!

We had a lot of writing sessions during the course of the year prior to recording and there was a lot of jamming in soundchecks too, especially on the various touring legs in the US.

The album was recorded in Atlanta with Jeff Glixman producing – he was great to work with and brought out the best in me with his encouragement – but the guys in the band were fantastic too – all in all, the vibe on that album was brilliant.


EA: Let's talk about the current tour - you are coming to the U.S. as very special guests of Judas Priest. This bill has been talked about as soon as it was announced over here. I know all the Saxon and Priest metalheads are stoked about this tour! What can we expect from the Saxon set when the tour starts here?

NG: We’re absolutely over the moon to be on this tour – we’ve known the Priest guys for a long time.

With the new album out we’ve obviously got to concentrate on that, but we’ll try and get in as many old favourites as possible. But as I’ve said, it’s the Thunderbolt album we’ll be featuring.

Apart from the Priest gigs we’re doing a lot of headline shows too – that’ll mean we’ll be playing longer and so can fit more songs into the set.

Whichever way you look at it, we’ll be giving 100% every night!!

EA: Will the set be tailored a bit more for a U.S. audience or will it be similar to what you would play if this tour was going on in the UK or Europe?

NG: I think generally it’ll be pretty similar to what we would play in Europe, but every country has its favourite songs so there are bound to be some variations.

EA: I wanted to mention that I noticed on social media that you always have a wide variety of craft beer in your photos. For instance tonight I saw a bottle of Samuel Smith's with your dinner. I am a craft beer geek and I also used to work in the industry for a short spell here in Seattle. What are some of your favorite brands of beer as well as beer styles? Any beers you would recommend to your fans out there? Any plans to make a Saxon beer (ala Maiden and Motorhead)?

I’m a big IPA fan, particularly the west coast ones, which I’m led to understand have the more citrus/pine/hoppy taste that I like.

More recently I’ve been drinking dark beer – found a great one called Tanilla – I think the brewery is ‘Knee Deep? – they also do a dark IPA!

As for other favourites – More Cowbell, anything by Sierra Nevada, Lagunitas, the list goes on and on!

We have a Saxon beer in Sweden – can’t remember what it’s called, sorry!

I think that everyone is now jumping on the bandwagon with beer, wine etc – there’s too much choice!!

I’m perfectly happy trying various brews out from Specs or HEB – that’s going to take me a while!!


EA: Thank you so much for taking the time to do this interview. If you'd like to do a follow up in person (maybe talk shop about beer as we have some of the best craft beer here in Washington state), let me know. The last words are for you:

NG: Yes, lets do an in person follow up! – I’d like to hear some of your recommendations – and talk drums of course!!!

To anyone hesitating about coming to a show on this tour, DON’T!! – its going to be great!!!!

A big thank you to all the Saxon fans out there!!


Thank you for taking the time to do this interview! 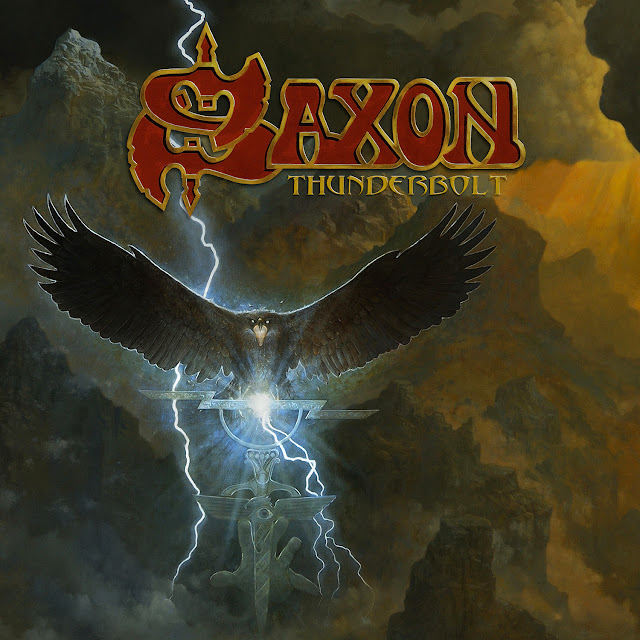 Posted by Eclectic Arts at 2:10 PM