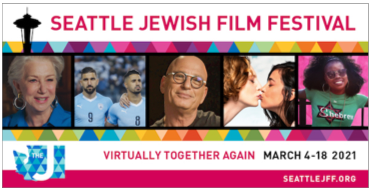 The Seattle Jewish Film Festival (SJFF) has announced its full line-up of streaming films for the 26th festival, running March 4-18, 2021.

SJFF features 19 films from around the world, including Germany, Poland, Argentina, Israel, and Norway. This year’s festival features comedies, love stories, and tales of triumph and overcoming adversity to joyously bring us virtually together again, even though we're far apart.

The festival opens with the documentary film HOWIE MANDEL: BUT, ENOUGH ABOUT ME, a revealing and funny look at the Emmy-nominated comedian and game show host’s quirky career and struggles with mental health. The film will be available for streaming March 4-7; as with all films in the virtual line-up, it will be available for 72 hours. Howie Mandel will also join us, along with acclaimed documentary film director Barry Avrich, for a Zoom conversation.

“The films in this year’s virtual festival focus on light, levity, and laughter to brighten our spirits in dark, challenging times,” says Pamela Lavitt, SJCC Arts + Ideas and Festival Director. “Comics, romantic comedies, inclusivity, and triumphant gritty stories will bring everyone in your household together—even if virtually—to gather ‘round and laugh, cry, debate, and celebrate global Jewish and Israeli cinema in our hearts and homes.”

Tickets for SJFF are on sale now. Single household film ticket prices range from $12-20. Ticket 6-packs range from $60-75 and Full Festival All-Access passes for $160-180. Discounts are available for seniors 65+ and students. While tickets and passes are per household, only one device can watch a film. Once you start playing a film, you must continue watching on the same device/location. All films are available for 72-hour viewing windows. All films can be viewed in WA state and many can be viewed from outside of WA. Check the film descriptions for specific geographic viewing areas. We recommend reading our STREAMING FAQ's before purchasing tickets.
Full festival schedule and online ticket sales at  www.SeattleJFF.org

For a list of all programs in schedule order, including streaming windows for each film, visit www.SeattleJFF.org 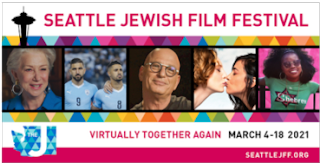