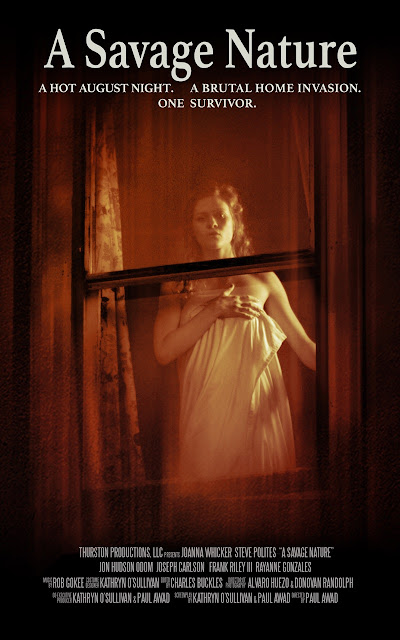 CHECK OUT THE
LIVESTREAM INTERVIEW WITH STAR JOANNA WHICKER!
The new film “A Savage Nature” is inspired by true events revolving around a home burglary/invasion that goes awry. Set in a small rural town, the film wastes no time setting up the narrative in which a couple who are having marital problems have drifted apart and they are trying to figure out where things went wrong. One night they are approached by two men at their home who say they need to report an accident but their phones have no service out there.


No spoilers here but the film takes a turn or two after that point and is really engaging. The film firmly sits in the true crime/thriller genre if that helps any readers out.


“A Savage Nature” was entertaining, if a little bit predictable at times. The lead actor Joanna Whicker does a fantastic job of playing the wife who yearns for more in her life. Her performance kept the story moving along at a believable pace.


Overall, an enjoyable film for those into the thriller genre.