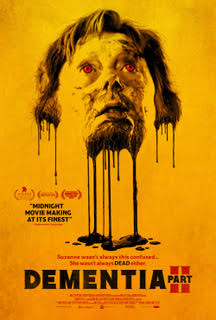 The film, “Dementia Part II” is a quirky horror film that took five weeks to produce. The film was reminiscent of a theatre play gone wrong.


The use of black and white film instead of color doesn’t really distract from the movie. The performances of the two lead actors Matt Mercer (who is also one of the creative team behind the film) and Suzanne Voss really kept the film from going off the rails. Well, by the end of the film, things are off the rails but in a good way for a horror film with some black comedy thrown in.


“Dementia Part II” shows how a group of creatives can put a movie together that can hold their own with the best of the other films in their genre.