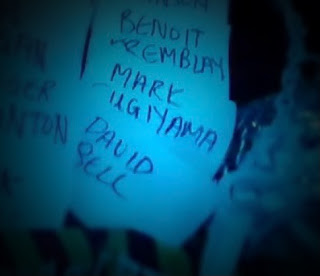 What an eventful week! Obviously for us here in the U.S. Wednesday 1/6/21 will now live in infamy. On a personal level this week has been really rough for me. But, I’ll spare you the details. Just know things got so ridiculously bad that all I could do was laugh the laugh of the damned.

But, to get things back on track and clear my head a bit, I found myself trying to catch up on my film reviews which meant I had to sit at my laptop and, well, here I am writing Part IV of this series.

As always - this is one person’s opinion or perspective. Written in one take.

First - let me say thank you if you’ve read any of these journal entry style posts about The SoapGirls. Whether you enjoyed them, skimmed through them, or just thought they were shit, I do thank you for at least taking the time to interact with them on some level. I can see the views on each post and it gives me a very rough idea of my limited or expanded audience with each post. So, thank you.


Second - I’m kind of floored by the views on the written interview I did with the band back in July 2020. I re-posted it recently and I think some people just missed it the first time around. I wasn't an “involved” fan back then so I think it only reached a limited audience. But, again, thanks for checking it out. I was itching to publish that one back then but as I’ve already written about - I waited since I was on the virtual tour with AL1CE and basically posting more than once a day about that tour, my guests, etc. I didn’t want the written interviews to get lost in the mix of posts.


Third - thank you for watching the virtual interviews I’ve conducted with the band - either in real time or when it was convenient for you. I’ve enjoyed doing them and I am very grateful for the time the band has spent chopping it up with me. I know this is a luxury that will eventually go away once they’re back on tour (ditto many of the artists I’ve interviewed) so I’m trying to make the most of it while I can.


I’ve written about this in other reviews, interviews, and such but it bears repeating here. If you like something, you like it. If you don’t, you don’t.


My own background when it comes to music is somewhat formidable - depending on who you ask. Was I a professional touring musician? Nope. Do I have a music background? Yup. Did I work as an audio engineer? Yup. Did I ever play music around town? Yup. Does any of that make me an expert? Absolutely not. But, like many of you reading this, I do have some credentials to my name and that accounts for something.


I featured music heavily when Eclectic Arts (EA from here on out) started because that’s what I knew. I went to my first concert when I was nine years old and it’s been downhill ever since. Again, like many you, I lived and breathed music for the majority of my life - and still do.


Having said that, when I was first approached to photograph my first concert (2015), I basically had to start from scratch. My only saving grace was my model photography background so I at least had a basic photography foundation. But, shooting models that pose is night and day to shooting a concert of back bending musicians in bad light that I have no control over.


So, when it comes to music and what I see and hear, I feel I’m an informed person/fan/press. Again, not an expert but I have enough to back up what I say or think.


A comment came in tonight about the “haters” of The SoapGirls and their music - how the person didn’t understand it. The band and I discussed something similar in general during one of the interviews. There are always people out there, particularly in this social media/keyboard warrior world, that will knock on something just because they can. It takes less than a second for someone to click the dislike button on a YouTube video. No reason given - just a gesture that everyone can see on the video’s page.


I know there’s a clip on YouTube of Millie telling off some heckler at a show. I’ve mentioned before (during the interviews) that I’m not a violent person but I’m surprised Millie had enough time to cut that jerk down to size. I figured the fans would have taken care of him as soon as she started addressing him. Maybe they did after she was done. I dunno.


You can see a pattern of behavior too if you think about it. The girls have always done what they believed to be right - from selling soap for charity when they were in single digits to what they do now as The SoapGirls.


And they’ve gotten shit for it from young and old alike.


I have no clue what they were like as young children (well I kinda do) but (again we’ve talked about this) it’s so fucked up that children AND adults mocked them during those years. There’s always three sides to every story but I get the feeling because they were doing something different, something they believed in, others targeted them. And good on them for not changing their ways. I’m not saying it was easy - I’m sure many a tear was shed during those formative years - but just think what would have happened if they caved into the bullying and the torment?


I wouldn't be writing about this band called The SoapGirls right now and you wouldn’t be reading this as a fan of the band either because they wouldn’t exist.


I know I’d rather focus on the love instead of the hate. Why some people take the time to go around, say, YouTube and leave dislikes and nasty comments on video pages is really pathetic. Your life must be empty as all get out to spend so much time spreading negativity just because you can.


I used to tell my students “just because you can doesn’t mean you should”. Instead of bringing that person down, how about you try lifting them up? I think the band and I subscribe to this way of thinking.


But ask yourself - have you ever disliked a video or left a negative comment on social media? I’m speaking in general - friends page, band you follow, photo you saw, etc. It’s easy to get caught up in all of it if we’re not careful.


I think another reason the band gains the attention of haters is their appearance. They’ve said more than once they have no control over how someone perceives them and they’re right. They don’t. The band is going to do what they do and fuck the haters. If someone is so immature that they can’t get over someone with a nudist mentality, that’s their own issue - not the bands. If someone can’t see the art and the artistic expression in what the band wears on stage, that’s on that person’s limited vision.


Ever met someone that’s not artistic minded? I have. They could still be a great person don’t get me wrong but they’re wired differently. I’m not necessarily talking about those folks. I’m talking about the conservative, prudish, nude=sex, etc. kind of dingdongs.


And let’s not forget the haters that think they know what is “true” punk rock, or rock, or even music. The flag waving gatekeepers of the Internet that try to dictate what is worth supporting and what isn’t. These haters live and breathe in the underground of all genres of music. I’ve been around them for years in the metal underground.


It’s laughable. It really is.


I go back to my earlier comment. You like what you like and vice versa. Don’t like something? Move along to something that you do. No need to let every other person in the world know why some band is shit in your opinion. But some haters just have to prove why their opinion is right and your’s is wrong.


I can say from my limited view (having known about the band for a few years now but I was on the sidelines) it seems the haters, while still there, are not as prevalent as before. I think what’s happened is the word is getting out about the band and more and more people are becoming fans. So the haters are getting much more outnumbered than before. They always were outnumbered but even more so now.


Again, I know some people that are now fans of the band because of the work I’ve done with them - including the social media posts, etc.. They get it. I’m sure all of you reading this have turned someone new onto the band at some point, too. Social media can be great that way.


Does the band know that a professional ballet dancer likes the band? How did that happen? Yup - my EA social media. And I don’t say that egotistically - I’m fucking happy that more and more people from all walks of life that know or follow me are now following the band.


The band knows how to deal with the occasional hater. They’ve got so many insults ready to hurl at them it's amazing to watch/hear. Do I wish those haters would just move on to something positive? Yes. But, the world ain’t pretty sometimes. You deal with the negative so you can get back to the positive.


And on a future touring scale - more of the hate is coming. The fans in the new countries will of course show up to the shows. But so will people that have no idea who they are, that just happened to be at the club that night, or if the band isn’t headlining, etc. They're going to get the negative comments or the “hey baby blah blah blah” comments, etc. The band doesn’t give a shit about that though (IMO). They love their fans that support them and will tell off those that hate on them and their work.


But they will also have the opportunity to make new fans on these tours. To convert the uninitiated into their world. That’s obviously where we, the existing fans, come in. I know even as a media member, when certain artists come to town, I always try to get friends/family to check them out. Send them links ahead of the show date so they can see and hear what I’m talking about. With music it’s worked rather well. I’ve got enough open minded friends that have checked out bands they knew nothing about. Spreading the word.


With opera, not so much lol (referencing one of the virtual interviews again). I have had two friends accompany me as my guest to the Seattle Opera - one even went to a second performance. Other than that, no takers. Millie - if you’re ever here in Seattle and the timing’s right - that EA media member guest list spot is your’s if you were being serious. No free whiskey in the press room I’m afraid - but there is wine. Lots and lots of free wine.


Take care everybody and, again, thank you for reading my ramblings.