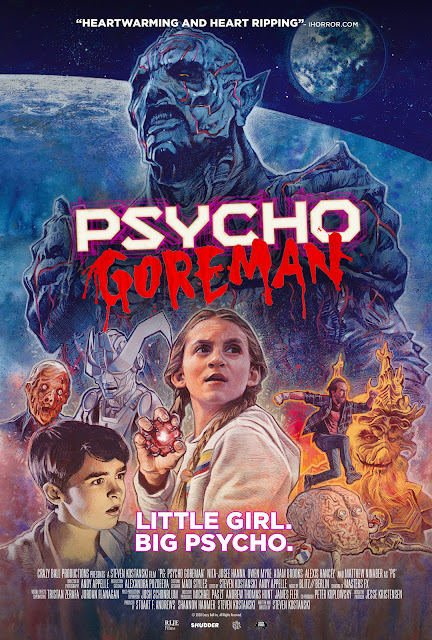 It’s always fun to view a popcorn type movie. I was definitely in the mood for such a film and “PG: Psycho Goreman” delivered in some aspects.


With a story that involves two siblings and a creature from another world, there isn’t much more that needs to be said about the plot.

(Matthew Ninaber as Psycho Goreman in the horror/action/comedy film, “PG:PSYCHO GOREMAN,” a RLJE Films/Shudder release. Photo courtesy of RLJE Films.)
Practical effects were used throughout the film (with some digital as well). If you grew up with actors in rubber suits, costumes, etc, then you know the type of vibe the film was going for.
It’s lighthearted in tone with some over the top effects so it never gets too serious. It walks the line of camp and horror to dare I say a kids type movie. The character of PG definitely stands out and I could see them making a sequel.

(A still from the horror/action/comedy film, “PG: PSYCHO GOREMAN,” a RLJE Films/Shudder release. Photo courtesy of RLJE Films.)
Whether or not the creators set out to make a cult classic I don’t know. But, it wouldn’t surprise me if a contingent of fans get behind “PG: Psycho Goreman” as just such a film.
If you can suspend your disbelief, and are looking for a fun film, “PG: Psycho Goreman” will hit the spot.
Best,
Mark Sugiyama
Eclectic Arts
Connect with Eclectic Arts:  Social Media Links Here!
TRAILER
RLJ Entertainment Official Site
Posted by Eclectic Arts at 11:31 AM