THE DARK AND THE WICKED Film Review November 1, 2020


The Dark And The Wicked 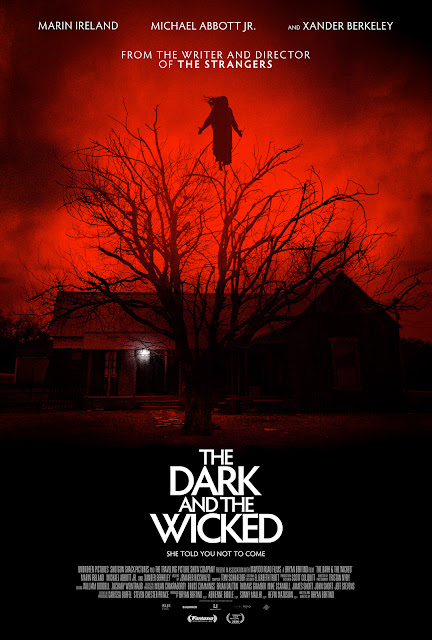 (RLJE Films - Shudder)
I grew up with horror films so any time there’s an opportunity to review a new horror film I’m cautiously excited. There seem to be more misses than hits this year in 2020 (maybe that has something to do with the year). But, I’m happy to say “The Dark And The Wicked” is a hit.


A slow burn to start where a daughter comes back to visit her family farm where her father is very ill. Her mom and brother are there and while all looks typical it certainly is not.

(Marin Ireland as Louise in the horror, “THE DARK AND THE WICKED,” a RLJE Films/Shudder release. Photo Courtesy of RLJE Films/Shudder.)
I love it when a film can create an atmosphere of creepiness without any gore or jump scares in the first half of the proceedings. “The Dark And The Wicked” slowly gets under your skin before the visuals go beyond creepy.


Several times I got chills up my spine during certain scenes which is always a good sign of a quality horror film in my book.

(Michael Zagst as Father in the horror, “THE DARK AND THE WICKED,” a RLJE Films/Shudder release. Photo Courtesy of RLJE Films/Shudder.)
Is the film reinventing the genre? No, but it does deliver on several horror genre fronts which is to be commended. If you like your horror more creepy than gory, “The Dark And The Wicked” is for you.