OPENS IN THEATERS JULY 30 IN NY AT THE IFC CENTER &

AUGUST 6 IN LA AT THE LAEMMLE 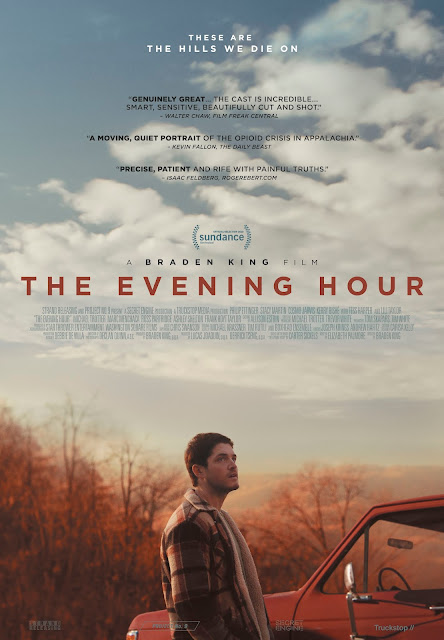 The opioid crisis has plagued the U.S. for many years now. Here in the Pacific Northwest we are not immune to the issue, even where this reviewer currently lives has seen its share of drug paraphernalia, labs, and arrests.


The new film “The Evening Hour” tells the tale that many probably wouldn’t think much about when mentioning the opioid crisis - rural towns across America - in this case in rural Appalachia.


Cole Freeman (brilliantly played by Philip Ettinger) works a normal job but his side gig is running a hustle of cash in exchange for excess painkillers from the local senior citizens. A pill pusher for the drug addicts in town.


Director Braden King lets the narrative develop ever so slowly over the course of the film. New characters are expertly folded into the screenplay as the balance of life in the town slowly unravels. Territory becomes the main issue of contention along with new dealers trying to get in on the action.


“The Evening Hour” is a slow burn of what rural America used to be and what it unfortunately has developed into (at least parts of it). The performances and the storytelling are top notch with not one weak link in the cast.


The drama in the film felt all too real at times which is one of the highest compliments I can give the creative team.