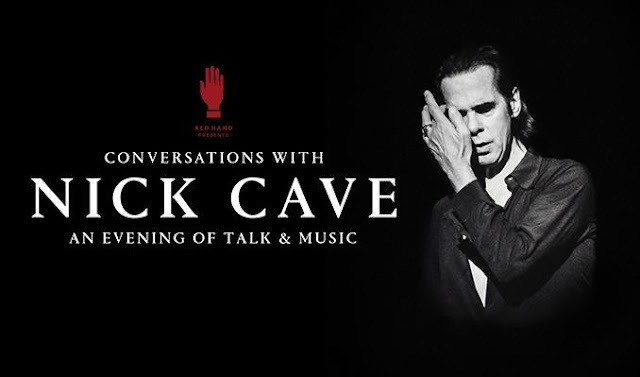 As I sit here attempting to write this review of the artist Nick Cave, I find myself split over just how to approach this write up. As Nick mentioned last night at the Moore Theatre in Seattle, its great when media have to write their own thoughts on an event, album release, etc. instead of using what the publicity firm sends out. The three-hour event left me pondering many things. And I liked that.

Nick is one of those artists I've always known about. Some of my favorite artists acknowledge Nick as one of their main influences (two such artists were just here a week ago). I also have a few friends that absolutely love his work. But I went into the event as a newer fan, not a diehard like many in attendance. So, my review is from that perspective.

I greatly appreciated and understood what a unique event this would be. I can't think of any concert where I got to hear from the artist directly, fans got to ask questions, and music was performed as well. While I cover comic and pop culture conventions from time to time (so the fans asking questions part I was used to), nothing compared to last nights event.

The evening started at 8pm. The audience was made up of a wide range of fans. Alternative, young, old, hipster, creative types, and the like were everywhere. The stage had tables in the back and sides where fans got to sit for a unique perspective on the show. A grand piano and sheet music were front and center.

Nick walked out to a thunderous applause and the music began. Nick solo on the piano and voice, launched into, "The Ship Song" and the Moore Theatre became an intimate club once Nick started performing. When he finished, the house lights came on, and Nick addressed the audience. Mics and spotters were placed on all three floors (main, balcony one and two) so fans could ask questions. This happened every time the music stopped and the questions started.

Nick was open and honest as he answered questions. He jokingly allowed people to take phone photos of him for 15 seconds and then asked everyone to, "put the fucking things away" which (almost) everyone did for the entirety of the show.

It was clearly evident that the fans that got on the mics were for the most part well spoken, intelligent, and diehard. Nick asked everyone to be respectful of the questions asked throughout the night, no matter how repetitive or crazy they may get.

Many personal stories were shared by more than one fan, about loss and some about happiness, too. Case in point a marriage proposal happened on stage early on in the event. The fans were growing a little tired of the time this was taking up so it was hurried along. Other questions asked covered topics like religion, grief and overcoming it, wedding music, poetry, children (pro and con related to the environment or some shit), and of course music related questions.

Nick performed songs that through the questions asked, were ready to go (for the most part). The set-lists confirm that for the most part, a certain amount of songs were rehearsed for these shows. When a certain question(s) got asked, a segue way would present itself to perform a related song to the question. This was a concert after all. The order of the songs was rarely the same, and some songs got played in some cities while others weren't. But, the bulk of the songs were the same city to city.

I appreciated what Nick had to say about song writing, about empting yourself and getting to work. He spoke about failures connected to failures during the songwriting process but eventually a lyric will work. Then, you can connect that lyric to another lyric, and so on, until something comes of it to complete a song.

He also spoke about knowing when to stop during the creative process and move on. I found inspiration in this, as I tend to spend too much time trying to make a song or artistic idea work when I should really stop and move on.

Something else that stayed with me was the concept of putting songs out in the world and letting the listener finish them or fill in the gaps. Nick mentioned more than once that he doesn't want to force his beliefs on the listener. He wants the listener to listen to a song and connect with it in their own way, free of his influence. It sounds like a simple plan but it's rather complex and inspiring when you think about it.

Nick also spoke about the Red Hand Files. Nick has been answering fans questions to be proactive rather than reactive. He mentioned gaining much insight into his fans and how they receive his work.

The event lasted three hours. The questions from the audience portion grew a bit tiring after the second hour; this was even mentioned by a fan that requested more music. Again, for me having never seen Nick Cave live, I wanted more music too by that point. But, these shows are experiments that Nick has little control over. The questions from the audience steer the songs and vice versa.

It must also be mentioned that Nick has a fantastic sense of humor. Self-deprecating at times without openly laughing (other than one time), Nick was engaging and his fans loved hearing directly from the artist himself. I found the concept of talk and music intriguing and suggest other artists consider doing the same in the future.

Ending the show on a T-Rex cover, Nick's signature baritone wrapping around each line in the song, the night while long, seemed short. The house lights went up, Nick thanked the crowd, and the three-hour event was over.

I mentioned at the beginning of this review I wasn't sure how to go about reviewing the event last night. Nick Cave is a highly respected artist. I listened intently to what he said from the stage and part of me doesn't think any one can review Nick Cave. I can write my impression of his event but it seems rather futile. I took away from the conversation last night that his music and other artistic endeavors are really to be explored by each individual. There is no right or wrong. There is only resonance - what each listener feels (or doesn't feel) when listening to his artistry.

So, here is my review of Nick Cave.

Special Thanks: Jacob - thank you very much for the opportunity! I really appreciated it!

BTW:  The title of the review came from a moment in the show on Friday in case you were wondering.

THE RED HAND FILES
Posted by Eclectic Arts at 7:08 PM