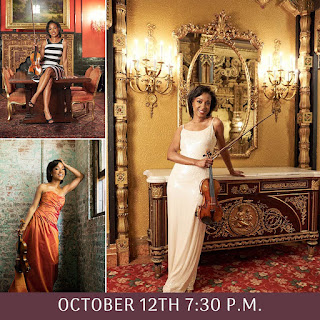 (Edmonds Center for the Arts)

As we roll further into Rocktober, I had the distinct pleasure of attending the performance of Kelly Hall - Tompkins. Kelly was performing at the Edmonds Center for the Arts in downtown Edmonds, WA. Three "band mates" (Kelly mentioned she has a hard time calling her fellow musicians a band) joined her on stage for the majority of the set in one configuration or another.

Kelly is an accomplished violinist and chamber musician, among other notable skills and accolades. The show was advertised as featuring compositions from Kelly's album, "The Fiddler Expanding Tradition". Kelly performed on Broadway as the "fiddler" in, "Fiddler On The Roof" and gained much notice for her violin-playing prowess. She performed over 400 times during her run with the show a few years ago.

The concert program on Saturday evening was split into two sets - the first being songs from "The Fiddler Expanding Tradition" album and the second set were songs inspired by the show or the music therein.

Performing with guitar, stand-up bass, and accordion, Kelly weaved magic with her violin. As a musician myself, and having attended and reviewed enough concerts in my lifetime, I can honestly say that Kelly possesses a technique that is just a pure joy to watch. She is faculty at her alma mater so whatever student(s) she's working with, you're in a grande position to learn from one of the best.

The way Kelly conveyed the story of the "Fiddler" show was mind boggling to watch. Plenty of images raced through my head as the first set came to a close. I haven't even seen the musical (yet - the touring version is coming to Seattle in January 2020) but after Kelly's performance I felt like I had.

After an intermission break, it was interesting to see Kelly perform music by the great tango master Astor Piazzolla. I had just seen jazz-fusion legend Al Di Meola perform his music a few weeks ago as well so this was an extra treat.

The musicians performing with Kelly were artists she had met while working in New York on the musical production. All were stellar of course - something I would expect when playing with someone of Kelly's caliber.

Kelly and her ensemble band came back for an encore and the audience gave them a standing ovation after the last notes rang out - deservedly so. Master musicians performing timeless music on a Saturday evening in Edmonds - it couldn't get any better than that.

It should also be mentioned that Kelly spoke every so often between pieces. She was intelligent, nuanced, and very well spoken. Learning that she was a polyglot - this didn't surprise me. She speaks eight languages (and counting). Her background to the music gave some insight to what was going on in the story, her approach to the music, and other behind the scenes information.

Overall, the performance was as satisfying as it could have been. Strength to strength, tune to tune, the audience that attended the show was treated to a world-class event. Here's hoping Kelly returns to the area sooner rather than later.

Special Thanks: Kelly - thank you very much for the opportunity!