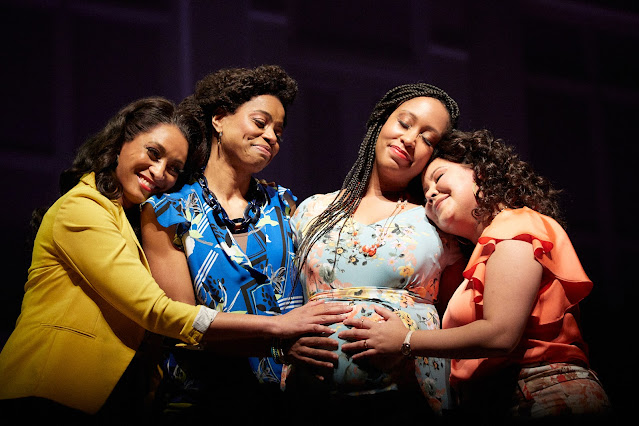 The new contemporary opera, ”Blue” made its west coast debut on Saturday evening at McCaw Hall as a part of the Seattle Opera’s 2021/2022 season. The subject matter has unfortunately been extremely timely with the current events of 2020 and beyond. Without spending too much time on the political aspects, let’s just say the story has been going on for decades.


As a part of the Seattle Opera’s racial equity initiative, it is wonderful to see the longtime leader in the Seattle arts scene walk the walk, so to speak. They easily could have slipped back into pre-2020 thinking but they have done nothing but the opposite. Kudos to the organization for that.


“Blue” starts with the introduction of the main characters of The Father and then The Mother. They are never given names. The family dynamic is established with the birth of The Son. The dynamics between the family are clearly established, perhaps even a bit too much so.


With The Father being a police officer and The Son being an artistic activist, you can see there’s going to be disagreements.


Of course, being an opera after all, there is great tragedy in the family dynamic that is explored throughout the second act. That’s all I’ll really say.


On one hand I really thought “Blue” was a breath of fresh air. It was unique and it had a narrative that I as a person of color could relate to. The story was strong and again one that touched a nerve after what happened in 2020. It was warm and endearing at times and I was definitely drawn into the world of the family.


However, it also went perhaps a bit overboard on the examples to hit home a point. For example, the opening scenes with The Mother and her girlfriends, what is it really necessary to talk about China and their love of male over female babies. Yes, I understand that an African American male baby faces a very different world than a female baby, the point was made. I think it could have ended there.


I realize it’s a fine line to create an opera that is a hard truth for some demographics to understand or relate to, while other demographics know all too well about the themes within “Blue”. It just felt like a few things could have been eliminated or tweaked to make for a more cohesive narrative. That’s all.


Now, the cast? Stellar! Briana Hunter as The Mother and Kenneth Kellogg as The Father were as on point as they possibly could be. Emotive, strong, vulnerable, there really aren’t enough adjectives to describe just how amazing they both were.


Joshua Stewart as The Son made the most of his part and in many ways stole the show. His voice for starters was pure money. And then his acting ability to portray the volatile role just made everything that much more special. What a talent!


The rest of the cast were all strong in their roles. There were absolutely no weak links. None.


The staging was minimal, which was neither here nor there. However, I would have liked to have seen more done with the lighting design. There were certain scenes where a deliberate change in the lighting would have had an enormous impact on the emotional weight of the scene.


Overall, it was a pleasure to see “Blue” on the McCaw Hall stage. I want more contemporary operas telling the stories of more diverse populations in the future. Thank you to the Seattle Opera and to the creatives involved with “Blue” for paving a new trail in the future of the world of opera.