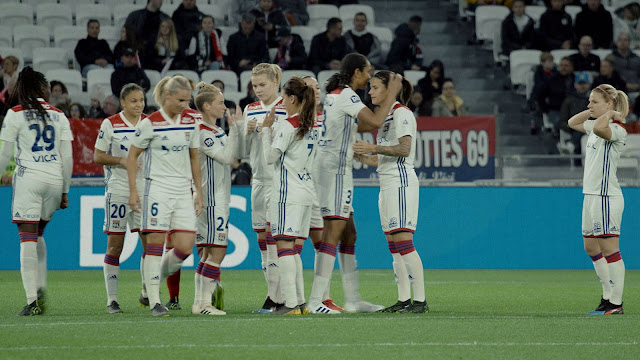 The virtual portion of SIFF DOCFEST which I'm reviewing three films for continues this first full week of October (through the 7th). The documentary “The Squad” is an interesting look at the Olympique Lyonnais football (soccer) team from France.


Made up of multinational players, the team’s quest for a triple crown in one season is well documented in this film.


Any sports fans that follow women’s sports (any of them) like I do, know the huge disparity between the men’s and women’s games in terms of pay, awards, recognition, respect, etc. This is no different for the OL team from France. They didn’t become a professional team until 2009. They didn’t see a professional practice facility nor place to play until 2011/2012. And the list goes on.


Being a sports fan, and a WNBA season ticket holder of ten years before, I could empathize with what the players were saying. As the Welsh player stated, respect is the biggest deal breaker. Money, contracts, etc. are all secondary to receiving the respect they deserve as professional athletes.


I think the documentary could have been condensed into something similar to an ESPN 30for30 episode - one strong hour of storytelling footage (and yes I know some of those episodes are longer than an hour). The film veered all over the place at times and I think it lost a little, just a little, of it’s impact because of it.


“The Squad” is an interesting look at professional football in France. For the sports fan, I think you’ll find it worthwhile. For the non sports enthusiast, I’m not so sure.