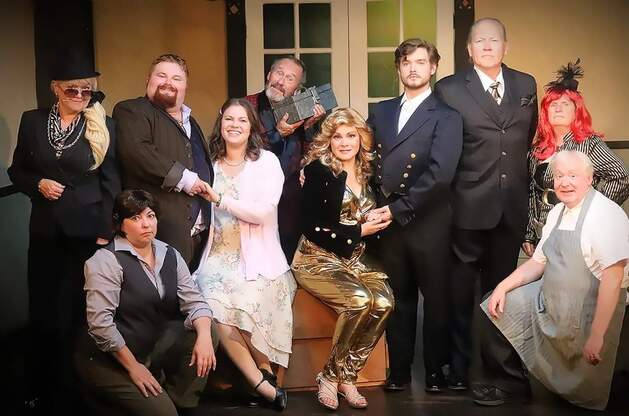 The new in-person production by The Phoenix Theatre is a delightfully entertaining farce entitled “The Miser”. The plot has many subplots but to keep it simple the play is about an older man who wishes to marry a younger woman who his son happens to be in love with. Of course there’s much more to it than that but, as always, I prefer to let the patron go into the show fresh without too many spoilers from this reviewer.


Michael Gene McFadden plays Harpagon (The Miser) and once his character gets going, he never lets up. He was the mad man that kept the audience laughing through his delivery, physical humor, and over the top (only when needed) character choices. Being the central character, it was vital that Harpagon be played by an actor that could capture the audience's attention and keep it for the duration of the play - and keep it he did!  Jumping out into the audience for a quick part (complete with face shield) was a creative touch.


The ensemble cast including Phoenix pillars Susan Connors and Melanie Calderwood, and Phoenix regulars James Lynch and Curt Simmons, were a welcome sight to see back on the stage.


Like many of the past Phoenix productions I’ve reviewed, “The Miser” was a sum of it’s abundantly talented parts. And for all of us, myself included, I’ve so missed walking upstairs to the doors of the Phoenix and sitting down amongst my other Edmonds local patrons, and enjoying a laugh and some incredibly underrated theatre.


Of course I want to mention how much care the staff put into making this production as safe as possible for everyone involved. Masks, vaccination or negative tests, social distancing (reduced seating for more than ample spacing between everyone), and everything else they could think of to make this return to live performances work.


Being that this was my first in person arts event back “after” the pandemic to review, I wasn’t really sure what to expect. Aside from the strange realizations I had before the show started (that I hadn’t been in the Phoenix since February of 2020, the sheer amount of virtual media work I had accomplished during the pandemic time period, etc.), I was relieved, happy, and more than satisfied to be back at the Phoenix.


“The Miser” is the perfect return for the Phoenix Theatre. Do not miss it!