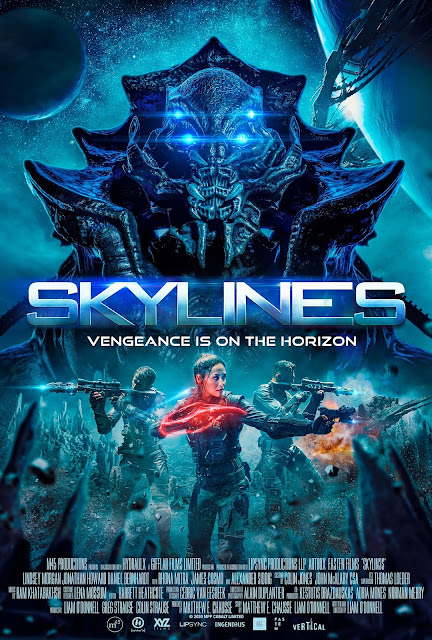 I’m late to the party as I didn’t realize the new science fiction action film “Skylines” was the third installment in the Skyline franchise. With the first film being released ten years ago and the second three years ago, the third film does work as a stand alone movie for the most part.


An elite team of soldiers are sent to an alien world in order to save the friendly version of the hybrid alien-human creatures from a deadly virus. To be honest that’s about all you need to know.

The action starts from there and it really is well dispersed throughout the film. I’ve said this before but with science fiction films, they are at a distinct disadvantage as there is so much that needs to be created to make the future world(s) look right, make them and their inhabitants believable, etc. With “Skylines” they definitely made the most of what they had to work with. In other words it looked good.


Lindsey Morgan as Captain Rose did a great job of leading the team into battle. There was enough witty banter during the film too that kept her character well rounded but still bad ass.

The creature visual effects looked good and the action sequences were well done, too.


“Skylines” is an entertaining romp through other worlds all while laying waste to the bad guys. Good fun!