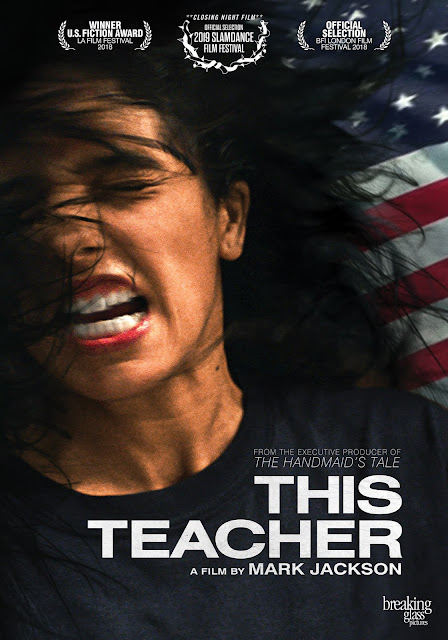 “This Teacher” tells the story of a Muslim woman from France named Hafsia (Hafsia Herzi) traveling to New York to visit her old friend Zahra (Sarah Kazemy). Things grow sour between the two of them and Hafsia goes to a rural wooded area on Zahra’s dime. There she is frightened by her surroundings and eventually meets a married couple in a neighboring cabin.


Director Mark Jackson attempts to make a social commentary on life for a Muslim woman in a post 9-11 society. The third act in particular becomes fierce and unnerving at the same time.


The outrage that Hafsia displays while in the woods really shows just how far apart some aspects of society are. This is especially poignant considering the state of the world right now in early June, 2020. Civil unrest, protests, extremist and opportunist groups everywhere - the chaos that is in Hafsia’s world is now in everyone’s world.

I found, “This Teacher” difficult to digest. I was not engaged with any of the characters until the third act. The story-line in the first act was almost pandering to the differences between Zahra and her husband and the friendship between Hafsia and Zahra. The second act was also disjointed and perhaps unintentionally hard to follow. The third act was when things went up several notches and in some ways I would have loved to have seen the entire movie on that cinematic edge that made me uncomfortable but also forced me to watch.


“This Teacher” was a challenging film but overall it did not do as much as it could have given the subject matter.

Posted by Eclectic Arts at 1:42 PM