I have not been missing in action.  Far from it.  If you follow me on social media then you know I have been on a virtual tour with the wonderful band AL1CE.  We started on May 22nd and just finished up the first leg on June 15th.  During this time, I decided it was best to wait on publishing any new interviews until the virtual tour was done.  I wanted maximum focus on each interview as they were released.

The first one out of the gates is from the German band Die Kreatur!  Thanks for reading! 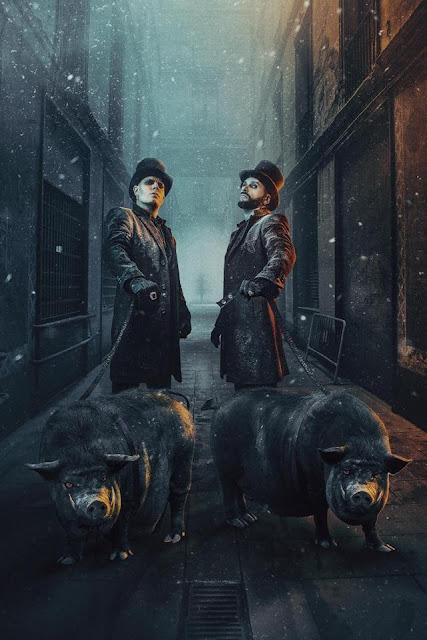 Eclectic Arts (Mark): Greetings! How did Die Kreatur come to be (how did you form)?

Die Kreatur (Dero): We have known each other for quite a while because we played at the same festivals with our other bands several times but we first really met at the "Darkflower Club" in Leipzig/Germany during an event on which musicians were invited to perform as a DJ.

Even though we had just a small talk, we realized that we like each other and have the same way of looking at music and what it means to us being musicians.

As we both are very creative persons who appreciate fast results in the writing process, we thought it would be great to meet again and try and see if we could collaborate in any kind of way.

So a few moths later we met at the Chameleon Studios in Hamburg, where Chris is heavily involved as a mixer, composer and producer of his own music and many other artists.

Before we entered the studio to be productive, we talked about God and the world about 3 hours long, as far as I remember.

EA: Tell me about your background please. What you were like growing up, how you got into music, what are some of your favorite bands, etc.

DK: As a child of the 80's, I was musically socialized by hard rock and metal acts like AC/DC, Motörhead, Iron Maiden on the one hand, and rather electronic acts like Soft Cell, Depeche Mode, Kraftwerk and New Wave and Postpunk Bands like The Cure, The Smiths, Sisters of Mercy or New Order on the other hand. Back then both scenes were totally departed and everyone who was involved into rock and metal hated everything about electronic music and vice versa. As I found this categorical and childish behavior of those musical scenes back then pretty pathetic and embarrassing, I told myself `why not form a band where both sides are represented as kind of like a fusion of rock/metal and electronic/synth/new wave music because really liked both sides of this musical coin. So i founded OOMPH! with my other 2 band mates back in 1989, this historical year of the fall of the wall. Much later, in the middle of the 1990's the music press named OOMPH! the founders and Godfathers of Neue Deutsche Härte. Bands like Rammstein, Eisbrecher, Unheilig and Megahertz still call OOMPH! their main musical influence of which we´re pretty proud to be honest.

EA: Your debut album is coming out soon, "Panoptikum" on Napalm Records. What can you tell me about it? Songwriting, recording, mixing, etc.

DK: It was such a relaxing way of working together with Chris straight from the beginning that the songs, lyrics and sound ideas just fell out of us two without forcing the creative process at any time. We just needed about 5 weekends to write 90 percent of the album which is pretty fast if you ask me. Later on, we added some additional electronics and guitars at home, each one on his own and presented with results to each other. Again, we were very astonished about the amount of cool ideas coming from each of us and that we both liked almost everything about them. So, after all each of us had almost the same impact concerning writing, producing and recording because it came clear pretty early that we would perform both on each song 50/50 vocal wise to keep also this part of DIE KREATUR as relaxed and fair as possible. Thank God none of us was trying to be the better one or saw himself forced to prove something to one another. Right from the beginning we had much respect for another which made the whole process extremely uncomplicated and free from any stress. Benny, a friend of Chris, which also works for Chameleon Studios did an awesome job on the mixing and mastering. We´re extremely satisfied with the result and are absolutely in love with our newborn baby.

EA: What is the goal of Die Kreatur? What kind of band do you want to present to the world?

DK: Well, as we did not want to reinvent the wheel we just let our creative output flow without any musical corsage or lyrical limit but pretty soon it came clear that the songs would be mainly about human abysses, inner demons and the struggle between good and evil within the human soul. As we wanted DIE KREATUR concerning style and look to be clearly different from our other two bands (LORD OF THE LOST and OOMPH!) we located look and lyrical content in the "golden 20's" of the freak shows at the carnivals including creatures like the elephant man or grouns breaking movies like "M", "Citizen Kane" or "The Third Man". We pretty much like the idea of the connection between this era at the end of the industrial revolution and our current times in which the biggest changes already come along with the digital revolution, eventually even much faster than back then. And it certainly fascinates and disturbs people all over the world at the same time at it was within the industrial revolution times. Besides this, it´s a nice side effect to refer on those times when you do sort of industrial music with DIE KREATUR.

EA: How important is image to Die Kreatur? Your recent music video is very stylish and cinematic.

DK: Of course it makes pretty much sense to also refer to your style and look in the videos, so we tried to bring DIE KREATUR into the 1920's with the first video "DIE KREATUR". The second clip "KÄLTER ALS DER TOD" deals with any kind of blood suckers and emotional or physical vampires in the world which have always been fascinated and frightened generations.

EA: With all live events on hold right now, what are your plans to promote the album?

DK: We´re already working on two more video clips and we also hope that the upcoming gigs are going to happen. Let´s keep our fingers crossed.

EA: Where you do you see Die Kreatur in, say, five years from now?

DK: If you want to make the Gods laugh, tell them about your plans...

EA: Do you have any plans to visit/tour the United States once things open up again (maybe in 2021)?

DK: That would be awesome indeed, so as soon as there´s gonna be a promoter or agency which is willing to book us for some shows in the US, we´re ready...

DK: Thanks a lot to all our US American fans and supporters. We appreciate your faith, patience and your absolute craziness for German music very much, indeed!

Posted by Eclectic Arts at 1:55 PM