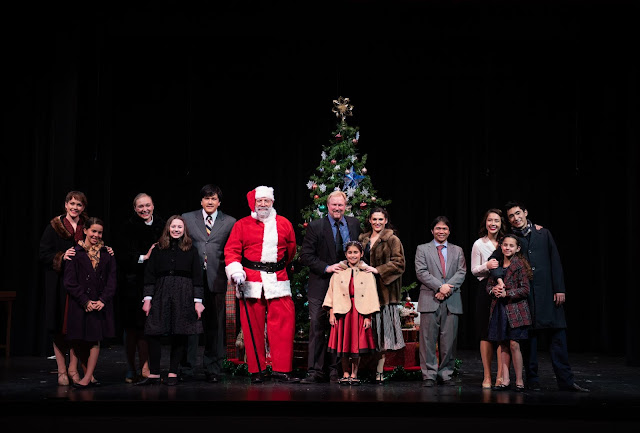 On a record setting day of rain in Seattle, I ventured out to nearby Shoreline, WA to check out my first production put on by the Seattle Musical Theatre. The theatre has been in transition as they were forced to find a new location for the company this fall. Fortunately, the Shoreline Auditorium worked out as their new space.

I can only imagine the extra stress for the company to find a new home, get their old set up broken down and transferred to the new location, and put on a show during the holidays. Well, I’m happy to report they put on a fine show on Friday evening.

I may be one of only a few people that have never seen, “Miracle On 34th Street” - the original or the updated version. I have seen snippets but I really didn’t know the story. So I went into the show rather fresh, not knowing what to expect.

First let me start by saying the Shoreline Auditorium is a former high school auditorium - so it’s large. In some ways too large as the intimacy of the show was somewhat lost in the size of the venue. It’s also not an easy place to find as the back of it faces the main street of First Avenue. If you’re seeing shows there look for the brick building due south of the tennis courts off of First Avenue in Shoreline - you’ll see a parking lot area and you’ve found the venue.

I’ve covered enough local theatre to know what to expect before seeing any show (usually). Talent varies from show to show and in this case - the talent was on the plus side.

Kate Ray as Doris Walker absolutely stood out among the cast. Her acting, singing, and demeanor was that of a seasoned veteran. I was mesmerized by her performance.  Ditto Craig Rock as Kris Kringle. He was just perfect as the beloved character.

Gary J. Chambers as Fred put in a fine acting performance as one of the other leads in the production. I particularly noticed Rachel Mills for a few seconds. She started singing a tune by herself in Act II for just a few bars before the rest of the cast came in and let me tell you - I wanted to hear more of her singing voice! This happened with a few of the other cast members that played multiple roles as well. Acting, singing, or both stood out at times. Great stuff from all involved!

The music was performed live which is always a plus and the sets worked for the most part as well. The mic system needs tweaking but I’m sure that has something to do with the transition from the old space to the new space. Voices were loud at times, quiet others, and at least one time the hanging mics were run into with set pieces (as they were moved from scene to scene) to a “pop” on the PA system. This is all easily fixed for future productions. No big deal.

Overall, I really enjoyed my first experience with the Seattle Musical Theatre company. I hope to cover their next show in the new year. Happy holidays!

Posted by Eclectic Arts at 1:59 PM