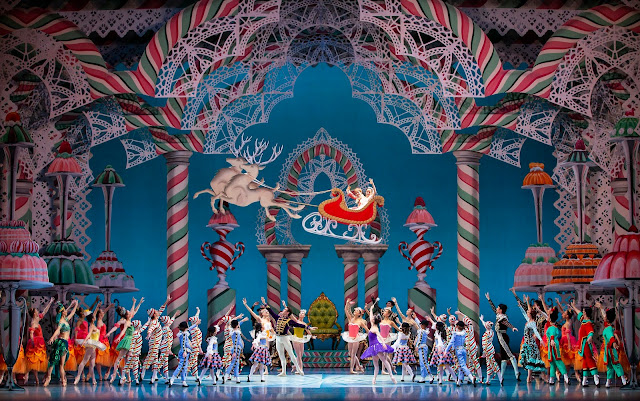 The holiday season has officially begun and what better way to start the season off than with, "The Nutcracker" at the PNB.

The lobby doors were adorned with the trees from the end of Act I so as soon as you walked in, you were immersed in the world of Clara and the Nutcracker. The giant Christmas tree in the lobby was a photo opportunity for many in attendance as were the other displays in the lobby. McCaw Hall was decked out in holiday colors and decorations. There were entertainers for the young ones and PNB student sugar plum fairies roamed the levels for more photo opportunities with patrons. Everything was set for opening night.

This version of the show started in 2015 so it's now on it's fifth season as the "new" Nutcracker that replaced the Stowell and Sendak version. Having reviewed this version last year, I knew what to expect and gave my family pointers on what I would have done differently last year before I saw the show.

The Nutcracker I'm coming to learn is really it's own part of the season for the PNB. Not just in revenue generated, but in the audience it draws and the approach to the event. Families with young children, non-traditional patrons of the ballet, and a few folks that looked like they'd rather be elsewhere were all in abundance. Of course there were also repeat offenders, subscribers, and holiday traditionalists that return every year. Oh - and the media. I can't forget the media.

ACT I featured Marissa Luu as Clara and Adam Abdi as Fritz. A dramatic Herr Drosselmeier as portrayed by principal dancer William Lin-Yee stood out during the home segment on Christmas Eve.

The battle featured Dylan Wald as the Mouse King along with mice, soldiers, and other characters. The cheese from the cannon was a clear difference between this version and the older version of the show.

The first act concluded with a forest in winter where the ballet dance work really started with the snowflake scenes. 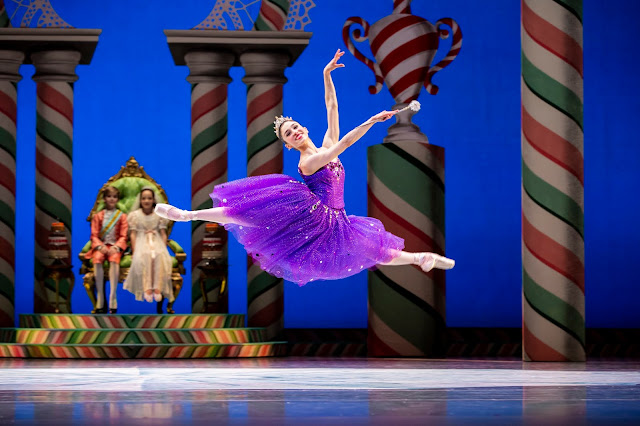 ACT II is all about the land of the sweets. The highlight being the sugar plum fairy portrayed by the always excellent Leta Biasucci and her cavalier Benjamin Griffiths. Coffee was danced beautifully by Noelani Pantastico and the evening's Dewdrop was gracefully performed by Elizabeth Murphy.

The always-engaging part (and audience favorite) of Mother Ginger and her Polichinelles was trusted to Dammiel Cruz.

I enjoyed Act II much more this year - mainly due to the fact that I could appreciate the dancing and the hard work more than last year. It felt actually odd to be waiting for the dancing to kick in. My how things have changed for me.

There were mistakes, which are going to happen when you have students of all levels in the production. It's all hands on deck during Nutcracker season so everyone does the best that they can.

The family oriented aspect of the presentation still rings true compared to the old version. There's freshness in the production but also more of a classical ballet feel (due to being Balanchine).

Personally, I think the PNB can run with this version another few years - maybe five - before going with a new version - hopefully brand new. It would be a risk but I think the patrons are ready for something they haven't seen before. A newly commissioned production down the road would be an exciting prospect.

But, for now, the joys of attending a performance are still there. It still feels like the holidays and that, for me, is the most important thing.

Special Thanks: Gary - thank you very much for the opportunity! 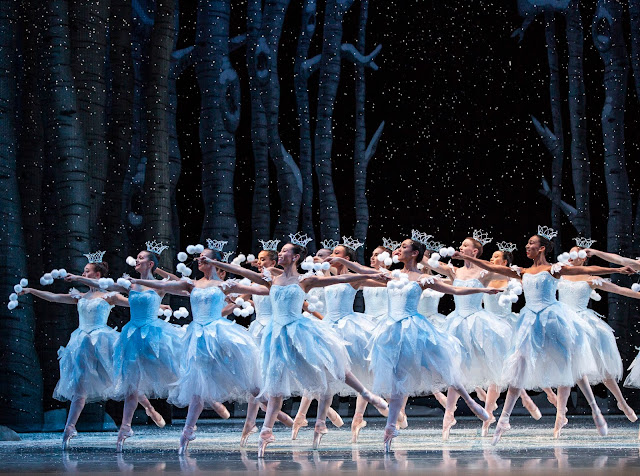