EVERY CHRISTMAS STORY EVER TOLD (and then some!) Opening Night Review! 12/13/19

Every Christmas Story Ever Told (and then some!) 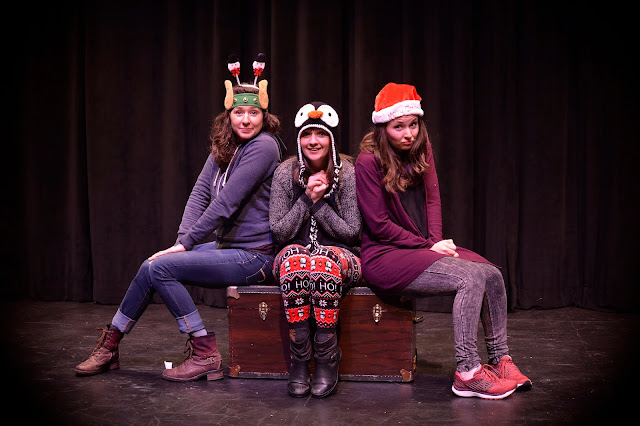 Friday night was opening night for a holiday show in the Isaac Studio at Taproot Theatre. "Every Christmas Story Ever Told (and then some!) was a wacky mix of theatre and improvisation by three outstanding actors familiar to the Taproot Theatre audience.

Two thirds were entertaining audiences last year in, "Miss Bennet - Christmas at Pemberley" - a show that I loved - and I just saw the other third in the fun improvisational show, "Sportsball". I wasn't really sure what to expect from this show going in but I was definitely curious.

The story revolves around a company attempting to put on "A Christmas Carol" and then proceeds to take the audience through a mashup of other holiday classics like, "The Grinch Who Stole Christmas", "Elf", "It's A Wonderful Life", "Santa Claus Is Coming To Town", "Frosty The Snowman", 'Rudolph The Red-Nosed Reindeer", and a few others.

With only three cast members, the humor comes from the dialogue, the comedic timing, and the massive amounts of scene changes, dialect changes, and some audience participation. 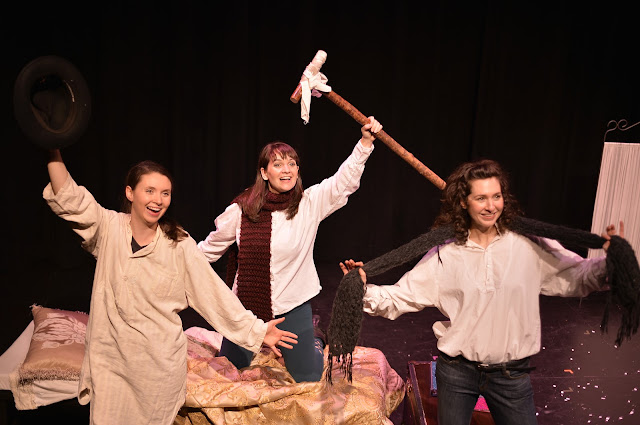 Shanna Allman as Noel, Kelly Karcher as Holly, and Emily Shuel as Carol were really having fun with this show. I enjoyed seeing Shanna showing her strong improvisational background - such a drastic change compared to the character of Miss Bennet. Her "A Charlie Brown Christmas" scene dancing was hilariously good, among many other scenes.

Kelly Karcher showed her range as Buddy from, "Elf", among a dozen (or more) other characters throughout the night. She also had a lovely singing voice during the music numbers.

Emily Shuel really shined as Carol. I particularly loved her switch between Jimmy Stewart in, "It's A Wonderful Life" and Scrooge in, "A Christmas Carol".

All three actors worked so well together. If there had been a weak link, the show would of fallen flat on its face. But there wasn't. All three shined throughout the ninety-minute performance. 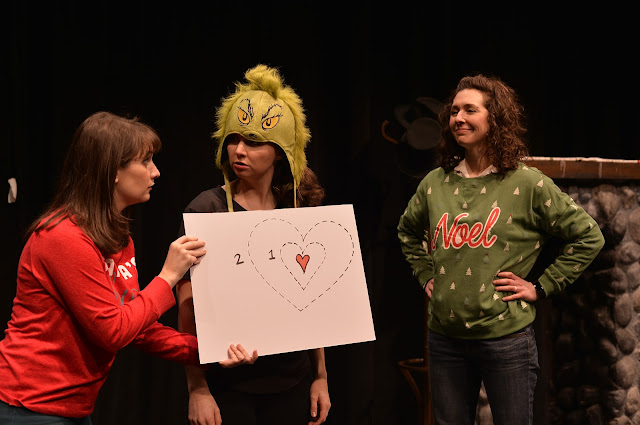 Before the show the audience was asked to put a few holiday memories in a basket, which was then used by the cast. My plus one's card got pulled out (baking cookies) and a few others which the cast then turned into mini scenes on the spot.

The game show portion featured a cute young audience member that made the scene work. If they had pulled me down, I don't think it would have had the same effect. Child VS adult - child wins in this case.

Overall, the show was light, funny, and very well performed. This is only my second improvisational theatre show and I'm slowly learning to understand how the casts approach the material VS a completely scripted theatre show.

The holidays are in full swing and, "Every Christmas Story Ever Told (and then some!) fit in nicely with the time of year (especially as an inside reminder that the human spirit is alive and well).

Special Thanks: Kyna - thank you so much for the opportunity!

"Every Christmas Story Ever Told (and then some!)" runs through December 22nd. Buy tickets here:  TICKETS!