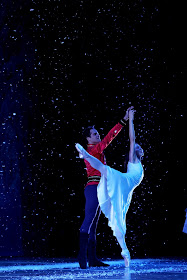 I made a rare deliberate decision which was to see and review as many holiday based events this season as I could. I enjoyed all the events I reviewed last year so I thought I should try to review a few more this year. The number came to ten events as of last night. This is in addition to my normal concert coverage and other events as well.

I knew there were other dance companies in the area besides the “big” one on Mercer Street but I had not had the time to look into any of them further. Being an Edmonds resident, the Olympic Ballet Theatre in Edmonds made perfect sense as my first company to review that wasn’t Seattle based.

Holiday shows are big income earners for practically every arts and theatre company out there. In some ways the shows are similar to a business that depends on tourists in the summer for much of their yearly income. The Olympic Ballet Theatre chose the much beloved, “The Nutcracker” as their holiday show of choice this season.

I have seen three different versions of the show over the years, and reviewed the most current version at “Mercer Street” last year and this year. So, I was very curious to see how this show would be presented to the patrons of Edmonds and abroad.

Held at the Edmonds Center for the Arts, the parking lot was full when I arrived which was a good sign for a strong turnout. I found my seats and waited for the show to start.

The show is divided into two acts - much like every other production I’ve seen or reviewed. The music started over the PA as the house lights dimmed and the show began.

The set and scenic designs were eye catching. They reminded me a bit of the Stowell Sendak version (which is a good thing) but they were also very much their own unique designs. I loved the use of the doors, fireplace, and closets as entrances and exits for the dancers.

Clara, Fritz, the Bergermeisters, and of course Herr Drosselmeyer were front and center during the first act. One thing that immediately stood out to me was the choreography and movement of the young dancers. It was wonderful to see actual dancing by these young students as compared to other productions where they appear to be focused on just movement. The ballerina and nutcracker “dolls” were also a very nice touch.

When it came to the tree scene, I smiled as the tree grew and admired the staff again for finding a creative way to pull off the scene in such a way. Very well done!

The young mice that came through the fireplace were as cute as can be. The blue and red soldiers and of course the Mouse King staged an imaginative fight scene.

The snow scene rounded out act one with Clara, the Prince, and of course the Snowflakes. I loved the fact that both Clara and the Prince were portrayed as older characters.

After a brief intermission, act two started and we were off to the land of the sweets. Let me say that all of the different dance numbers were well done here. Some stood out more than others but that always happens. The Arabian with Elianna Langley and Jose Iglesias was beautifully danced. The Waltz of The Flowers with Anisa Sinteral also stood out to these eyes.

Of course when Mother Ginger comes on stage, everyone takes notice. This version of the character was very well done (I’m sensing a pattern here) as the tiny dancers came out and danced through their number. Kudos to the wardrobe team for the excellent outfits here and throughout the production.

The Grand Pas de Deux with Mara Vinson and Alberto Gaspar was (arguably) the highlight of the evening. As co-AD of the company, Mara Vinson showed why this company is as strong as it is. She danced effortlessly, with beautiful arms and soft hands. Alberto Gaspar displayed his ballet prowess as well and it was just a joy to watch both dancers perform.

I can’t forget Frank Borg as Herr Drosselmeyer. Frank was extremely expressive throughout the production. His portrayal really kept the show on course and tied the story together in seamless ways.

I wasn’t sure what to expect from the Olympic Ballet Theatre. After seeing their version of “The Nutcracker” I see that I’ve been missing out all this time. I was thoroughly impressed with every aspect of the show. There was definitely a sense of - joy - throughout the show. The dancers seemed happy to be performing. I think for some companies, the holiday show run between Thanksgiving and Christmas becomes a labor of …labor. A necessary evil if you will that they know they must do in order to keep their doors open and their books in the black. It was so refreshing to see a company that, again, seemed to actually enjoy dancing and performing.

The show ends its run today but do yourself a favor. Check out their website for their next productions in Everett and Edmonds in 2020 and check out a performance. I know I will!