Sherlock Holmes
and the case of the
Jersey Lily 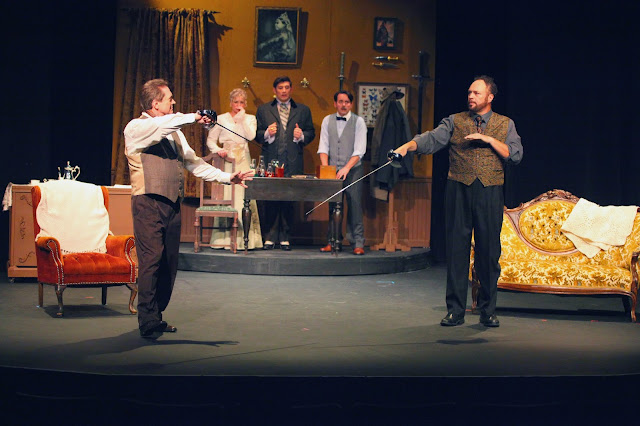 As the month of June comes to a close, so does the main subscription season at the Edmonds Driftwood Players. While I didn't cover the entire season (I came on board in December), I got a chance to see and review a handful of the shows.

With community theatre, and I've stated this before, you're going to get some hits and some misses at times. With the amount of theatre I've reviewed in the last year or so, I've become more in tune with what to expect at any given theatre, good and not so good. I do my best to not compare one show/theatre with another as that's not fair or good practice.

With this production of, "Sherlock Holmes and the case of the Jersey Lily", I found myself a bit disappointed. I'll tell you why.

The acting for this show was strong across the board. With previous shows here, there's been a wide variety of talent on the stage. And I get it. Every one starts somewhere. Some have loads of credentials to their name while others only have a few. It's a mixed bag.

But with this show, there were no weak links so to speak. All eight actors really had a grasp of the material and made the most of it. Jay Vilhauer as Sherlock Holmes, Joe Wack as Dr. Watson, Jenifer Gillis Rifenbery as Lillie Langtry, Jacob Livingston as Oscar Wilde, Robert Quick as Abdul Kareem, Sarita Benson as Mrs. Tory, Gabriel Ponce as John Smythe, and Scott C. Brown as Moriarty rounded out the exceptional cast. 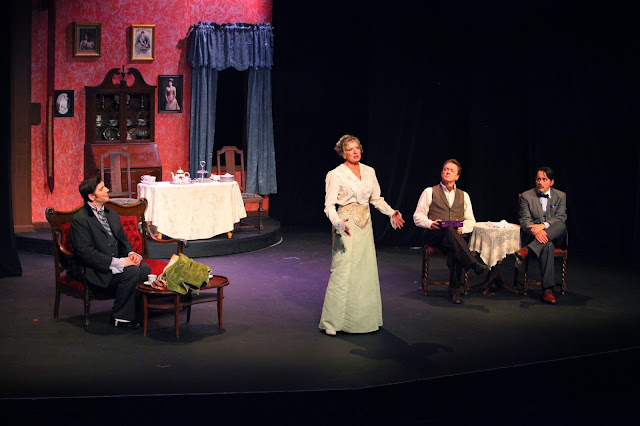 
The disappointment for me came in the story. Local playwright Katie Forgette penned this play and respectfully all I can say is it didn't resonate with me. I was ready for wit, mystery, surprise, you know - typical of a Sherlock Holmes mystery. But, I found very little. The lines fell flat (aside from one loud audience member that laughed at almost anything) and the show just seemed to drag on and on. Even when other productions take a different approach (such as a lighter, funnier approach) with Sherlock Holmes, I still found the performances worked well with the dialogue. Not so here. If the material matched the talent on stage, this would have been one of the best plays of the year in my mind.

I understand the labor of love quality of community theatre. There is so much sacrifice put into these productions (both on and off the stage) that I commend all of those involved. No one is doing it for the money, that's for sure. But the litmus test for me for any event Eclectic Arts covers is always - would I see it again. In this case, I'd politely decline.

So, at the end of the season, I left the Wade James Theater on an uneven note. Perhaps you saw the production and loved it. Who knows? The show runs through the end of the month with performances on Friday's, Saturday's, and Sunday's. Go check it out and let me know how your thoughts differ from mine. Thank you!

Special Thanks: Katie for the credentials - thank you for all the opportunities this season!