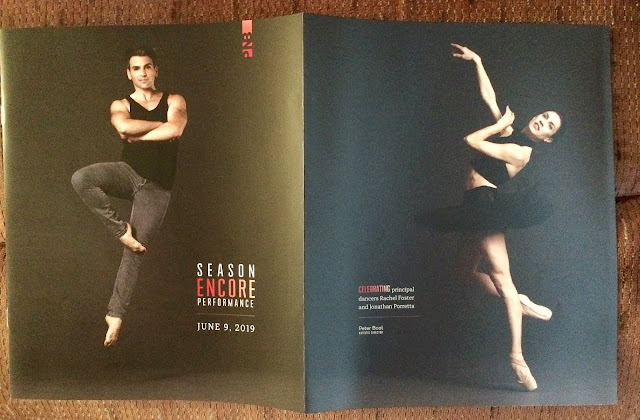 It's an interesting phenomenon when you are a "regular" at an event. Season ticket holders for sporting events, subscribers for arts events, and so on. The excitement of a new season and the inevitable ending of the season as well, the roller coaster of emotions for those truly invested in the event can only be experienced by being there night after night.

For the Pacific Northwest Ballet company, Sunday evening's "Season Encore", was even more emotional I'm sure. Not only were they celebrating the retirement of two of their principal dancers, but also one of their three ballet masters, lighting designer, costume shop manager, and others that have spent decades making PNB what it is today.

This was my first season reviewing events for the PNB (minus the first event in September). It's been a wonderful journey of discovery, massive education, and belonging. Yes, belonging. When I first started reviewing performances in November, I wasn't sure if this was "right" for me. I'm happy to say that here in June - it is.

The program started off with, "Themes and Variations" - which was the last production for the company this season. The Balanchine number was performed as well as on opening night - if not a bit looser than previously.

Artistic director Peter Boal came out and said a few words about those retiring before continuing the program.

"The Piano Dance" was next - celebrating the choreography of ballet master Paul Gibson. Lesley Rausch and Joshua Grant were excellent in this piece. The choreography absolutely stood out and their execution was mesmerizing.

"Rassemblement" was next with Rachel Foster and Jerome Tisserand. Rachel's first performance of the evening, she received a standing ovation after the performance.

"Bacchus" from its world PNB premiere in March was a welcome return performance. I thoroughly enjoyed this piece, even moreso than the first time. Divided into seven parts, this production piece was stellar.

"After The Rain" pas de deux wrapped up the first portion of the night with one of the most beautiful performances I've seen at the PNB. Rachel Foster and Seth Orza conveyed such emotion; I was completely caught up in their performance. I don't know if I would have said the same thing back in November. I feel I've come a way (not a long way but a way) since then and my emotional reaction to this piece confirmed it.

After the intermission we were treated to two more performances. "Silent Ghost" which I saw in November at my first PNB performance was as thought provoking as I remembered it. This was Rachel Foster's last dance performance of the evening.

And the last performance was, "Prodigal Son", by request of Jonathan Porretta, who was also retiring from the company. A chance to come home one more time perhaps, Mr. Porretta danced like you would at an encore - with grace, humility, emotion, and a dash of fun.

The evening concluded with ovation after ovation for both Rachel Foster and Jonathan Porretta. More and more company members came out to the stage to congratulate them and the audience roared in approval to send them off with an ovation to last a lifetime.

The PNB dancers have in many cases grown up together. They may have started taking classes when they were in their teens, been accepted as a professional division student, then either were offered an apprenticeship or a contract with the company. All the professionals behind the scenes have been their tutors, teachers, and guides for the same amount of years. And remember - these folks don't work 9-5 hours so they have really become friends and family over the many years. So, to say goodbye to two of their members is emotionally exhausting for all involved. The feeling of happiness for the dancers that are retiring but also the feeling of emptiness, of missing their co workers that have become like family must be a hard pill to swallow. But, we all know life and the PNB will carry on - but it's an emotional time.

And with that - it's also an emotional time for the audience, especially those that have seen Rachel Foster and Jonathan Porretta dance year after year. It's like when a star athlete retires. It's hard to believe you won't see them again on the field. Same with the stage at McCaw Hall. One last performance, please.

"Season Encore" was a great evening for me. I felt that it book ended a journey of coverage for this season. While I'm only at the tip of the iceberg, the performances Sunday evening reconfirmed that I am forever lost in love with the world of ballet.

Thank you very much for the experiences and memories. I hope to see everyone next season at the PNB!

All the best,
Mark Sugiyama
Eclectic Arts
EA on FB
EA on IG
EA on YT 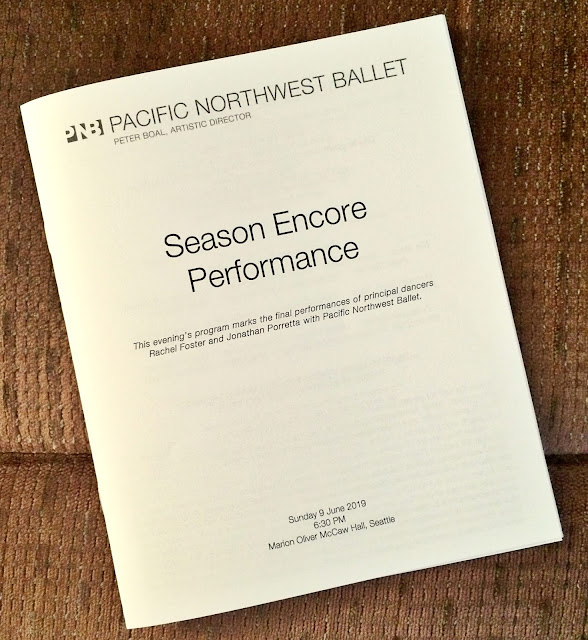