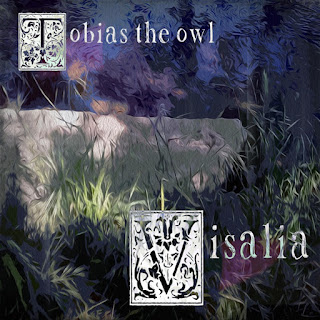 A city in California - that's what I found when I searched the title of the new Tobias The Owl release, "Visalia". Comprised of eight songs recently released through online streaming services, we find ourselves in a unique situation as a society (to put it mildly) as I write this review.

I tend to limit my music release reviews as I normally want to live with the music a bit, playing the release several times to really get a better impression of the music vs a one time through listen. In this case I only listened to the album twice.

My overall impression is that there is a new found confidence in these songs and their creator. Tobias The Owl has always released quality music but you could also hear the doubt, the artist "I can do better" curse that all artists suffer from, and the quiet respectfulness that permeates everything he does.

It is refreshing to hear more of a statement on this album. From the writing to the execution, "Visalia" shines from strength to strength throughout the eight songs.

Lyrically things are just as in depth as always, if not moreso. Tobias The Owl music makes you think, reminisce, and contemplate your own place in this world. I would love to read the lyrics to all of these songs - cue the old school vinyl album release with a lyric sheet.

From the first single, "Cadejo", which is a grower. After the second time through it opens up and makes its intent known as a song.

I particularly liked, "Sheets To The Wind". It reminded me of a mix of old and new Tobias The Owl material - a song that covers the journey that he has been on with his music.

The chorus in many of the songs is strong, stronger than they have ever been. The growth over the years is really a pleasure to bare witness to. I still enjoy the pre Tobias The Owl recordings but the last three releases show the potential of those early recordings in modern form.

Whenever the live music returns, a proper album release for, "Visalia" is absolutely due. Until then, stay safe.

TOBIAS THE OWL on SPOTIFY

TOBIAS THE OWL on BANDCAMP