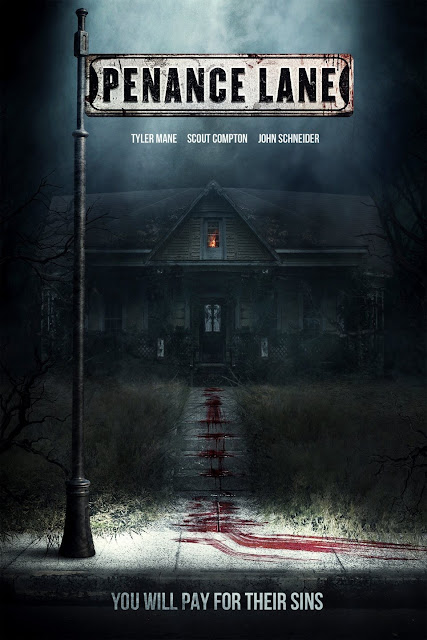 In such a strange time with the pandemic creating more questions than answers, I find myself thinking back to the first time I met Tyler Mane and Renae Geerlings. Eclectic Arts was not what it is today, much like the state of the world.

The year was 2013 and I was covering my second Crypticon Seattle convention, ever. I attended the, "Compound Fracture" panel and was intrigued enough to purchase a ticket to the screening a few days later at the Varsity Theater in the U-District of Seattle. I enjoyed the movie very much and bought it when it came out on DVD as well.

Also, since then, I've been waiting for the next project from Mane Entertainment, which was called, "Penance Lane". An Indiegogo campaign was launched and then it seemed to stall. Several years passed and I never knew what happened to the film. Until recently. Then I saw that it was getting released on April 21st via VOD platforms and I was excited to review the film.

So, with much anticipation, I sat down in the privacy of my quarantined stay at home - home - and pressed play.

"Penance Lane" stars Tyler Mane (RZ's Halloween I and II, X-Men, Troy, Compound Fracture) as Crimson Matthews, an ex-con looking for work in a small any-town USA. He finds work at a house on Penance Lane where things are not what they seem.

I never like to give away plot points in any of my reviews. I prefer the viewer to go (or in this case sit) and watch the film for themselves.

"Penance Lane" starts off with a flashback sequence that sets the wheels in motion. Booker Huffman (known as Booker T in the wrestling world) commands his scenes as most of the top talent does in the professional wrestling business. He is charismatic and his presence is felt for sure. The opening sequence plants the "what's going on" seeds early and often.

The next scenes are present day, introducing the main characters, and take their time to set up the story.  Then once we're introduced inside the house on Penance Lane, things start to take a turn about a third to half way though the film. The action, pacing, and horror all go up a notch or three and really never let up until the film is over.

I liked that "Penance Lane" was not a typical horror film - similar in that respect to, "Compound Fracture". There are layers to the story - some may seem familiar - but overall the film is interesting. There are questions that came to mind early on in the film. Some of them were answered, some were not. It is more of a horror film than a thriller but it never lost my interest.

I honestly never noticed Scout's acting until this film. I know she's done a ton of independent work. I would love to see someone cast her in a serious, dramatic role. I think she has the acting chops for it and it would elevate her career.

Another stand out for me was the character of Precious. The mask worked, the movements worked. The sympathy card for the character worked as well. I would like to see a back-story spin off film of Precious.  Kudos to Renae Geerlings for making this character compelling.

Tyler showed again that he not only can handle physical acting, but emotive acting as well. I think he would make a great choice for a "My Bodyguard" type of character - the sympathetic big man. Get on it Hollywood.

The stand out performance was definitely John Schneider. His against type turn as Father John was just a pure joy to watch. In the basement scenes, he really got into character and made his scenes shine.

There were small things that needed work, too. The drums (in the score) when the characters in the house first appear, that didn't work for me. There was also an editing issue when Precious hands "something" to Crimson - the screen went black and then we saw what the "something" was (again I'm trying to not give away plot points). It was a weird, clunky, transition. Again, just small quibbles, really.

"Penance Lane" has been a long time coming. If you haven't burned out on watching movies on your TV during this pandemic, pre order the film on iTunes now or watch it on any of your favorite streaming sites, and get ready for a worthwhile ride on April 21st.