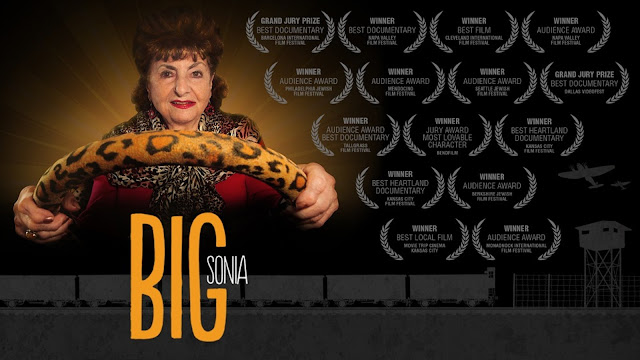 As I write this, there are citizens protesting the shutdown orders in various cities all around the U.S. due to the COVID-19 pandemic, including right here in Olympia, WA. After watching the heartfelt documentary, "Big Sonia" last night, I realize even more just how far apart some of us are in how we view the world.


Sonia Warshawski works in a ghost town of a mall, maintaining her late husband's tailoring business. She is a fixture for the regular customers that have been coming to the shop for years. She is also a Holocaust survivor. This film is her story.


"Big Sonia" goes between a live radio interview, friend and family interviews, day to day life at the shop, as well as speaking engagements in both schools and a correctional facility. Sonia stands big at 4'8". Not due to her physical size but due to her story, her willingness to share her vivid recollections of life in the death camps of Nazi Germany, and how she has chosen love over hate.


There is more to her story but I'll leave that to you to learn about as you watch the film.


"Big Sonia" was the last film for me to review out of four films over three days. In all honesty, I wasn't even asked to review it. But, I became aware of the film due to the Seattle Jewish Film Festival, which was to have held its 25th Anniversary this year. I was invited to cover the festival for the first time until the coronavirus pandemic shut everything down around the globe.


I found the film incredibly emotionally intense at times particularly when Sonia was describing her memories of the three death camps she was assigned to. The "left" gas chamber line VS the "right" go back to work line memories were just beyond comprehension to me. Horrible can't even begin to describe what that must of felt like for her and every other person, every other human being, held captive in those camps of unbelievable atrocity.


The film also delves into the children of Holocaust survivors, something I knew next to nothing about. The closest thing for me would be the experiences of my own family members that were sent to the Japanese Internment camps during WWII.


There are absolutely moments of levity - mainly surrounding the shop. But even that has its own story that I won't go into detail about here.


The producer and co-director Leah Warshawski is Sonia's granddaughter. Todd Soliday is also co-director of the film. They along with their team have crafted a well thought out film based on source material, Sonia herself, which cannot be denied. After you see the film, you will most certainly start thinking about things in your own life, the state of the world we are currently living in, and the ridiculous things from the past that are sadly still here with us in the present day.


I can't recommend this film enough. As a former educator, I recommend this to all of my educational brethren, and for everyone else that wants a reminder of the human spirit. "Big Sonia" delivers in spades.

Posted by Eclectic Arts at 4:06 PM