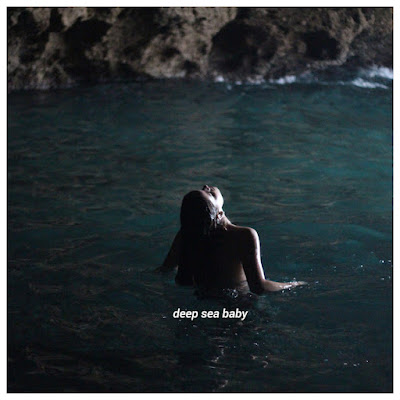 The pandemic that we are all living through right now had a small silver lining for me. Every live event was paused for the foreseeable future. My usual monthly schedule of concerts, theatre, musicals, ballet, and opera shrank to zero.  Many of us found ourselves with extra time on our hands. In my case, since I rarely stream anything, the extra time gave me an opportunity to go back and listen to some music that I meant to review. This release is one such case.

Released in 2019, "Deep Sea Baby" is the newest EP of material from Seattle's Bleachbear. I actually listened to the songs back in the fall but needed to listen to them again - which didn't happen until last night. Yeah, I suck.

The title track is a strong song from the band. It has all the trademarks of Bleachbear - dream pop melodies that are very pleasing to the ear. The difference is that the band members are in that "sweet spot" of life - college years. The writing reflects this. It is impossible to not grow during those 18-25 years of age. If you listen to all three releases from the band, you can hear the growth as artists and as people.  This is arguably their strongest song to date.

"Daisy", "Eighteen", and "Body Full of Sunflowers" are vastly different from the title track. Less layered but still dream pop oriented, the other three tracks sound more like songs from a solo album than from Bleachbear as a band. Having said that, any of these songs could of fit on an earlier release, though.

The band is active when schedules afford collaboration. Other priorities are in place - such as education - and rightfully so. I wondered what would happen to the band once they left for their respective colleges.

It's nice to know the music is still there, maybe not on the front burner, but still there in its glorious dream pop form. The band has been reuniting in the summer for shows. With this current situation in the world, it's anybody's guess if that can happen in 2020 or not. In the meantime, give "Deep Sea Baby" a listen or three.