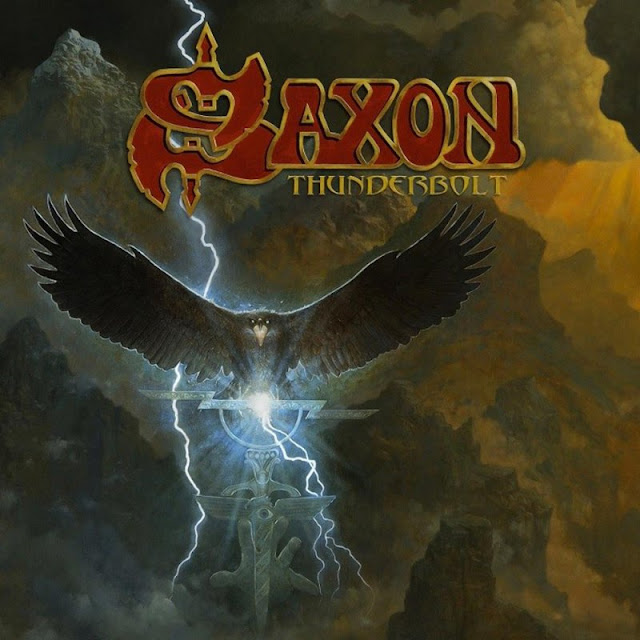 
I first saw Saxon live in 1983, as special guests of Iron Maiden, here in Seattle, WA. They were touring in support of, "Power & The Glory". To this day that is my favorite Saxon album. I eventually worked my way backward to the earlier catalog and fell in love with, "Wheels Of Steel", "Strong Arm of The Law", and "Denim and Leather".


I saw the band live three additional times in 1984 and 1986. Then they had a long break before returning to Seattle in 2013. They are now coming back in 2018 as special guests on the upcoming Judas Priest tour.


Which brings us to their newest release, "Thunderbolt". Starting off with, "Olympus Rising" - an intro instrumental that sets the stage for the title track. Biff and the boys rage right out of the gate with pure heavy metal thunder.


The next song is a standout to these ears. "The Secret of Flight" reminds me of "747" and "And The Bands Played On" as in it tells a story while providing a melodic but heavy soundtrack. There is no mistaking Paul Quinn's guitar tone as he has a unique sound and style of playing. This should definitely be made into a video/single if it hasn't already.


"Nosferatu" is an interesting departure as it goes into storytelling mode again but with a more symphonic background of instrumentation. There is also a stripped down "raw" version of it at the end of the album. Castles and darkness creep into the musicscape on this tune - it will be a killer when played live!


Most everyone knows the strong connection between Motorhead and Saxon, from their early touring years together. The pairing, while a little odd at the time, proved to be a perfect match as Motorhead's fans embraced Saxon and in many eyes gave them new credibility in their early career. "They Played Rock And Roll" is a tribute to Motorhead, complete with an audio snippet of Lemmy during the midsection. A fitting tribute to a massively influential band.


"Predator" is another Saxon barnburner and brings the heaviness to the forefront. It's interesting how Saxon has become a signature band in the heavy metal genre. After taking a departure in the early and mid 90's, they refocused and went back to their roots and have been flying the flag of metal ever since.


The next song, "Sons of Odin" brings us back to "Crusader" era Saxon where history is used as a vehicle for the lyrics.


"Sniper" and "A Wizard's Tale" showcase the band's diversity while still remaining heavy. The last two songs (not including the "raw" version of Nosferatu) are "Speed Merchants" and "Roadies". The former is a bit cliché' in the lyric department but it will get your head banging as does the ladder.


I enjoyed the album front to back. It was great hearing some harmonized lead work from Paul and Doug. I've always been a huge Nigel Glockler fan and he's drumming like a beast. Nibs is holding down the bottom end and will be going wild on stage when the tour hits the U.S.


It's easy to forget that a band like Saxon has been doing this a Hell of a long time. They never got there due here in the States like they deserved. "Thunderbolt" is going to be a fine album to be touring for here in the U.S. I know Saxon are going to make many new fans on their trip across the pond and are going to satiate their hardcore fans like myself. Either way - we all win.