THE CAKE
by
Bekah Brunstetter

There’s an interesting phenomenon when it comes to in-person live events right now. The last two years has a way of obscuring where things were before the pandemic, why any given event might be presented in 2022, and this very unsettled foundation that we all are building on moving forward.


The first live event for Eclectic Arts was hand-picked in October of 2021. Slowly but surely the familiar venues and companies have been checked off the proverbial “return to in-person” list which has been an amazing feeling.


On Thursday evening AS IF Theatre Company was added to that list.


The Kenmore based theatre company was ready to roll with their third full length production “The Cake” when the pandemic hit. Their first production “The Clean House” was delayed by mother nature and the cold white stuff. That was for a mere week or two. This delay was of course for two painstaking years.


The company returned to the stage with another fine production under their belts. One thing the AS IF co-founders Cindy Giese French, Amy Gentry, and Molly Hall bring to the table is experience. They are all veterans of the theatre community and it shows in the works they produce.


Consistency is always the benchmark for any business, not just theatre. If an eatery can’t produce my favorite dish the same way every time, I’m going to be going elsewhere to find that consistent product. Theatre is no different. AS IF has been entertaining audiences with a high level of consistent quality. That my friends is to be commended as it's not an easy task.


“The Cake'' is a wide mix of topics and themes that were relevant before the pandemic and just as, if not more than, relevant now. As always I like going into shows as fresh as possible so I’m not going to go through the obligatory point by point breakdown of the storyline. 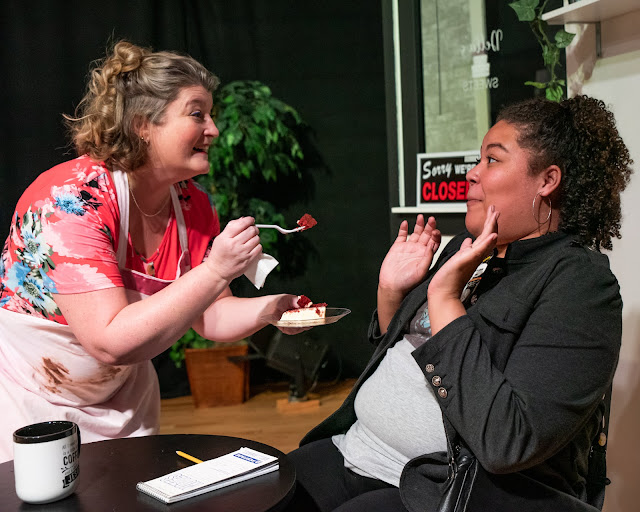 (Amy Gentry as Della and Roz Cornejo as Macy in "The Cake" by AS If Theatre Company.  Photo:  Christine Mitchell")

What I will say is that the themes of love, LGBTQIA+, marriage, age, gender, and many other areas are all explored within the ninety minute performance. Even buttercream and mashed potatoes work their way into the plot.


The central figure of Della is expertly portrayed by AS IF co-founder Amy Gentry. She is the rock that holds the show together. WIth the Carolina accent and the love of baking, Amy’s character has to face many hard truths about herself, her husband, and her outlook on life through God’s eyes. Many people will identify with the struggles Della goes through as she is conflicted about her feelings and her morality.


Stephanie Spohrer as Jen and Roz Cornejo as Macy also have to face the harsh reality of their union, their own upbringings, and the constant judgment by society as a whole.


Patrick Hogan as Tim (and George) is also faced with his “whys' '' regarding his own behavior toward his wife Della, her dilemma about the cake inquiry, and how his actions have affected his marriage.


“The Cake” has plenty of laughs within its narrative. The cast went for broke and it paid off. “If the actors don’t cross the imaginary line, the audience won’t either, and all falls flat at that point” - a well known film and television actor once told me. This wasn’t the case here at all. Each cast member grabbed hold of their roles and made them believable, taking the audience on a ride that went up, down, sideways, and upside down at times.


AS IF Theatre Company has added another strong show to their stable in “The Cake” by Bekah Brunstetter. Grab your tickets before they’re all sold out, much like a hot spot bakery that has a line around the block waiting for its sweet and savory treats.


Welcome back AS IF Theatre Company!