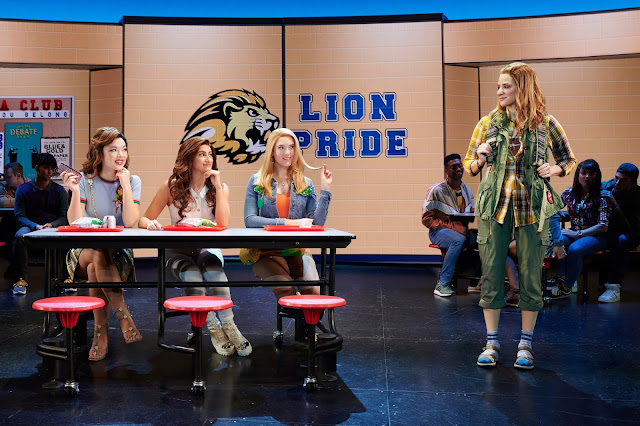 It was with great anticipation that I and my guest ventured into Seattle for the first time since the pandemic began in early 2020. The second show in the 2021/2022 Premera Blue Cross Broadway At The Paramount’s return to the in-person stage Tuesday evening was “Mean Girls” which is based on the popular comedic film of the same name.


This was only my third in-person event back since the pandemic so it was both nostalgic (which is weird to type) and exciting to get back to the Paramount Theater. Kudos to the event staff for getting the patrons through the Covid-19 protocols as quickly as they could. We were amongst the line of people waiting to get in twenty minutes before show time but for us the line moved quickly, the early hand stamp after having your credentials checked (card or negative test and ID) before reaching the tent really helped, and the line went by super fast.


The show itself was visually stunning to watch. I loved the use of the screens to depict the various classrooms, homes, and other sets. The lighting design was also worth noting which added the extra emphasis to each scene and musical number.


The story followed the film for the most part with a few changes or additions for 2021. Having seen the film recently, I can say that I was surprised to see/hear just how many songs were in this touring musical. I really expected more dialogue than numbers - yet we got the opposite. The songs just kept on coming with plenty of choreography as well. I enjoyed the early number with the lunch trays but after a while I started to yearn for more storytelling.


The performances from the entire cast were strong throughout which is no surprise for a touring musical. The characters portrayed are high school age so the singing voices needed to match. This was a bit grating to my ears after the first few numbers. Others were eating it up though so I think it just depends on what you like to listen to.


Fans of the film will most likely enjoy this musical. They’ll identify with the characters and the themes. I was somewhat surprised to see that not much of the themes were updated for 2021. They did change a few things but much of it was just left as is much like a time capsule of the film.


If you’re not familiar with the film, I honestly don’t know what you will think of this show. Again, it was a top notch production with a cast and behind the scenes crew that put on a bang up show. But the songs, the pitches of the performers, and the overall tone of the show (which was light) may be a hit or a miss for theatre goers. You’ll have to see for yourself.


Oh - and tsk tsk to the patron that had their phone out during Act II for several minutes. Such bad form.


Having said that, being back at an in-person Premera Blue Cross Broadway At The Paramount performance was amazing!  I knew I had missed attending the performances but last night really emphasized just how much I had missed them.  From that respect, it was a fantastic evening.