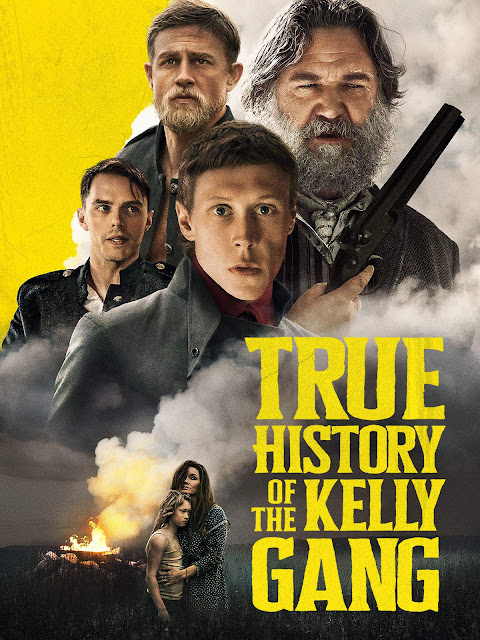 "True History Of The Kelly Gang" explores the well-known exploits of Australian Ned Kelly and his gang during the 1870's. With families of varying backgrounds moved, or in some cases sent, to Australia, there is conflict from an ethnic perspective, which the average person tends to forget.


The overly simple characterizations from established examples such as Crocodile Dundee (Paul Hogan) and even the late Steve Irwin have tainted the history for those that do not call themselves Australian. Irish, Scottish, British, and the like all planted seeds in the early years of Australia.


As directed by Justin Kurzel (Assassin's Creed, Macbeth, The Turning), the film depicts the life of Ned Kelly (played by George MacKay), from his life as a boy to that of a young man. The film is never hopeful. It is sparse and desolate, much like the surroundings of where the Kelly family live in rural Australia. They are poor only selling booze to earn any money to survive on. They look up to poverty.


Ned is sold to Harry Power (played by Russell Crowe), an outlaw in his own right, to teach young Ned how to handle his business. This is short lived and Ned fends for himself and also returns to visit his mother, father, and siblings. Nothing is ever easy for the Kelly family. If anything, it is a downright brutal way to live.


As Ned grows into a man, his resentment of the British grows, as does what they've done to his family. He enlists the help of his family and friends to revolt against the British establishment with undesirable results.


George MacKay (1917) is intense as the adult Ned Kelly. His next to zero body fat is on display as he fights for money, takes on a young bride with a child, and ultimately fights for what he believes in. His performance is nothing short of brilliant in the role.


Not to be outdone, Essie Davis as mother Ellen Kelly is equally disarming in her portrayal of the matriarch of the family. Ellen does whatever it takes for her family to survive, to the point where she is locked away to rot in a jail cell for her deeds.


"True History Of The Kelly Gang" is one of a handful of film interpretations of the infamous outlaw Ned Kelly. This version has a distinct weight to it that is hard to ignore. The story may be bleak at times but the outcome is worthy of multiple viewings.