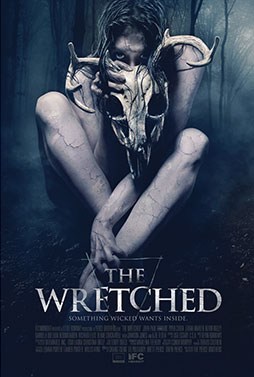 I am extremely excited to be reviewing films from IFC and IFC Midnight. Eclectic Arts has been covering a wide range of artists over the years. Our umbrella of arts coverage is ever growing and the films IFC has released over the last twenty years are a perfect fit for what Eclectic Arts does. Thank you.


"The Wretched" is a horror thriller from the minds of directors Brett and Drew Pierce, who also wrote the screenplay.

The story takes place during a summer for seventeen-year-old Ben (John-Paul Howard) whose parents are going through a divorce. Ben goes to stay with dad and work at the marina. The quirky teen co-worker Mallory (Piper Curda) plants the friendship and potential relationship seed early with Ben during the film.

Meanwhile strange things are happening with Ben's neighbors Abbie (Zarah Mahler), Ty (Kevin Bigley) and their two children. Ben is intrigued yet cautious about what's going on next door.

The Wretch (Madelyn Stuenkel) is the spiritual antagonist throughout the film that, well, you'll have to watch the film to understand what she does with children.

"The Wretched" was a film that reminded me of many others from my own teenage years. I could see influences from 1985's, "Fright Night", particularly with the voyeur scenes between Ben and his neighbors.

I also felt a bit of, "Invasion Of The Body Snatchers" influence in the film. The marking in the woods and the witch's lair definitely reminded me of a little, "Blair Witch Project" influence. I would also throw in, "Stranger Things", particularly with the finale in the woods and The Wretch's lair.

But "The Wretched" isn't a sub par copy of any of those films or shows. The tone wavers between eighties teen sex comedy and modern PG-13 horror. The film takes place five days ago for the present story and it kept my attention throughout.

The twist in the finale of the film (no spoilers here) was a bit hard for this reviewer to understand until I gave it some more thought. I think the narrative could have been stronger to make the pay off work better. But, overall, I liked "The Wretched".

This isn't a film for gore hounds nor is it the strongest storyline but the film keeps moving, provides scares (jump and otherwise), and builds up to a worthwhile finale.

The parting scene may have viewers guessing - I was one of them. But, again, overall the film was nearly a throwback to horror films that were easy to digest - something I feel is sorely missing in today's market.

I must say that the leads did a fine job of making things seem very appropriate for their ages. Piper Curda who played Mallory in particular was incredibly natural as an actor and her character was very believable. John-Paul Howard also did a nice job portraying a confused seventeen-year-old dealing with his parents divorce.

Zarah Mahler also shined in her scenes. She went from rocker mom to possessed mom with ease. She also showed an on screen allure that was hard to resist.

The makeup effects for The Wretch worked well and I understand Madelyn Stuenkel who played the character had to endure some very cold shoots and dirty locations during the filming. Her creature movements were spot on for what the character needed without being derivative of other horror icons.

"The Wretched" is a solid effort from the Pierces. It's not full of itself like some modern horror films of late and it's not basic enough to seem simple. It's somewhere in between and that for me worked just fine.

Posted by Eclectic Arts at 4:03 PM