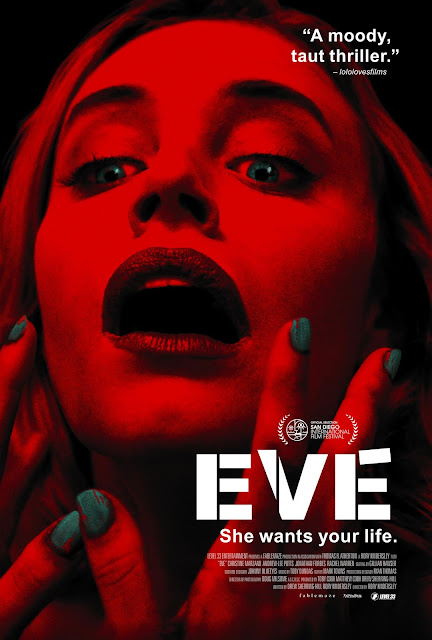 "EVE" plays like a familiar yet unusual film about an actress auditioning for a part she made famous on stage six years prior. She has her sights set on this part revitalizing her career as it had been fading ever since her theater work. She unfortunately loses the part to a younger up and coming actress where, at this point, the former actress goes off the deep end.


This film certainly has a tone of dread to it which I really enjoyed. The key performances by Christine Marzano and Rachel Warren also kept this film from slipping into direct-to-video fodder.


Marzano in particular really ran the gamut of emotions as her character of Alex Beyer deals with a home invasion, strange dreams, and a boyfriend that is less than supportive.


There was at least one jump scare that they could have done without. Director Rory Kindersley, who also co-wrote the script, has an engaging way of telling the story without reverting to those types of scares. The film is dark and gritty which puts the viewer into the world of the down and out actress that Warren plays so well.


"EVE" is more of a British thriller than horror film. I enjoyed the film and am looking forward to what some of the talented cast and crew do next.

Posted by Eclectic Arts at 3:21 PM