THE ACTORS’ GANG - THE NEW COLOSSUS

Written by The Actor’s Gang Ensemble and Tim Robbins 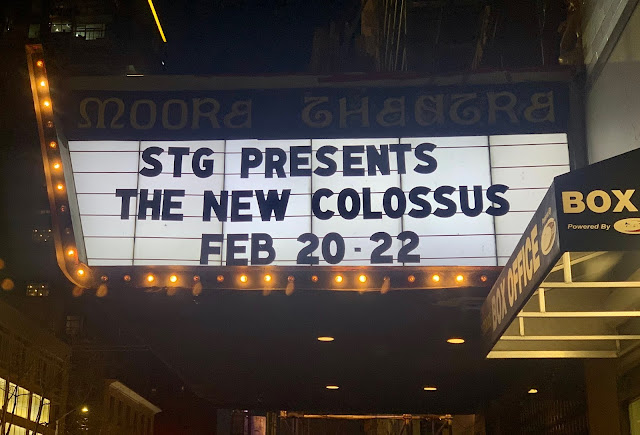 The Moore Theatre was the venue of choice for the Seattle debut of “The Actors’ Gang - The New Colossus” last evening. The play features twelve refugees, twelve languages, twelve eras, and one border.


Clearly this is a timely theme with the current administration but it is much bigger in scope than that. It is a theme centered around generations of immigrants, indigenous people, refugees, and similar.


As directed by Tim Robbins, the play was direct, honest, questioning, and pointed. The actors on stage were portraying family members of their own, telling each of their unique stories of their journeys to America in a group setting.


As an ensemble, the play was very much a movement piece. Portraying the chaos, danger, and uncertainty with physical movement on stage, carrying one suitcase of belongings, attempting to find a new home in a foreign land.


Images were displayed on the screen behind the stage depicting various scenarios of the stark reality of immigration, voluntary and forced.


The 90-minute play made one think of their own roots, their own stories. For nearly everyone in the audience who did not identify as indiginous, this meant digging into their own family histories to understand the foundational aspect of just how people from all over the world make up these United States.


The show included a talkback portion with director Tim Robbins and the entire cast. Many in attendance spoke about their backgrounds - first as indigenous people, then as refugees, then as forced immigrants, then as first generation, second generation, and finally third generation immigrants. The stories were moving and really showed the scope of the patrons in the audience. From Afghanistan to Finland to the Ukraine to El Salvador, there was representation from many different countries.


The talkback really hit home the point of the play. Without it, I think an opportunity would have been missed.


Overall, the play was engaging, a bit abstract at times, but it made for a thoughtful dialogue about immigration, the policies of the current day, and what the future may (or may not) hold.


“The Actors’ Gang - The New Colossus” runs through Saturday 2/22/20. Tickets can be purchased here:  TICKETS!