Beauty In The Suffering 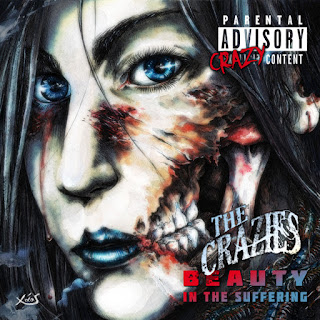 "I'm a songwriter".  This is what Beauty In The Suffering (BITS from here on) founder DieTrich Thrall told me in early March as he was waiting to take the stage later in the night with Kill Ritual - a metal band he was touring with at the time as a touring bassist.

"The Crazies" EP is a mixture of tunes that have been recorded over the last few years.  Three original tunes with one cover tune.  The Outfield's, "Your Love".

The EP starts off with "The Crazies" (The Zombie Song).  With an eye-catching video to boot, this song is infectious (pun intended).  While I'm by no means an expert when it comes to this type of industrial rock/metal music, the layers of instrumentation point to a creative songwriter that knows how to craft a tune.  This tune could easily be included on a soundtrack to a major motion picture.

Next up is "Reveille" (The Zombie Charge).  This is another catchy tune with a driving landscape of instrumentation.  I get the feeling that DieTrich may have spent many of his formative years channeling many different musical influences into what eventually became BITS.

"Juliet" is track three.  The opening few bars lead right into yet another catchy, industrially driven tune.  The mixture of musical styles within the layers of these tunes is really inspired.  The casual listener would dismiss this as basic industrial music.  Nope.  Not even close.  Listen to the tunes repeatedly and you'll feel them unravel and work their way into your musical psyche like only quality music can.  Great stuff!

The last track has been making the round on the 'Net.  My own little music duo has covered this tune recently as well.  I was told that this is one of many cover tunes that may see the light of day that BITS recorded.  A catchy tune from the 80's, "Your Love" gets the BITS treatment here.  I find the instrumentation a little more like a demo.  Just a little bit like a demo version.  Meaning that perhaps the track could surface in a new version that is more layered like the other three tunes on the EP.  Don't get me wrong - it's still very well done!

Overall, this EP is exactly that - an extended play release.  Having seen DieTrich with Doyle and Kill Ritual, I think it's time to see him in his own element - Beauty In The Suffering!

I hope this EP is a teaser to a full-length album and tour this year!

Thanks to: DieTrich Thrall for the advance of the release!
Posted by Eclectic Arts at 11:35 AM