The Phoenix Theatre wrapped up their current season with the comedy, “Women In Jeopardy” by Wendy Macleod.


The room was nearly full on Saturday night for the show in Edmonds, WA. The plot revolves around two women who think their girlfriend’s new boyfriend is a serial killer. You can imagine the possibilities with this premise. 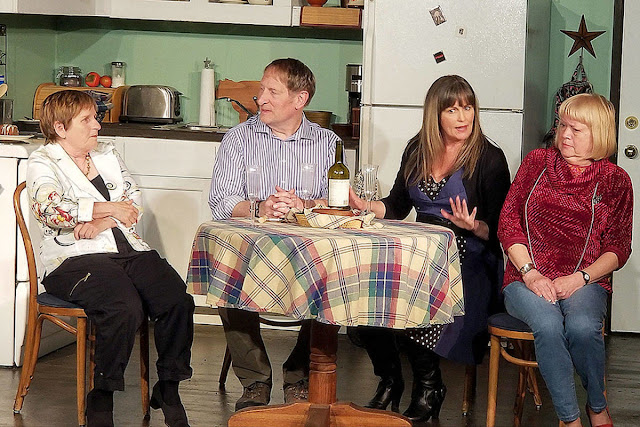 
The chemistry between longtime regulars Susan Connors and Melanie Calderwood was undeniable. Comedic timing, deadpan humor, and just plenty of laughs abound when they were on the stage. It was a pleasure watching these two veterans work their magic on stage.


BriAnne Green held her own on the stage as did Marijke Boers (their characters were mom and daughter respectively). Marijke Boers also provided the music before the show and at the intermission over the PA.


At other productions I’ve seen at the Phoenix, the supporting cast tends to run a wide range of talent. This time around all of the cast members contributed and were noticeably talented.


This includes another regular James Lynch who had great comedic timing as well as Bruce Erickson. Again, a strong cast made for an even better play.


Act II definitely turned things up a notch and the laughs kept coming. “Women In Jeopardy” will have you laughing all the way to the curtain call. It is a great show for the season to end on. Don’t miss it!