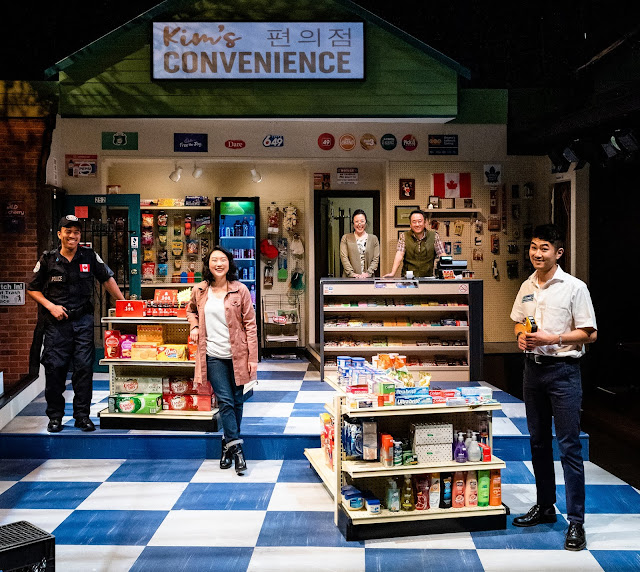 When the 2019 Taproot Theatre Season was announced, this show was the one that I was most looking forward to. "Kim's Convenience" is a play that has been turned into a successful CBC television show (going on its fourth season now).

Created by Ins Choi as a vehicle for himself to act in (he played Jung in the original production), the play and television show have garnered a healthy following of fans. This production is the U.S. West Coast Premiere of the play.

The show revolves around a family - Appa (dad) played by James Yi, Umma (mom) played by Annie Yim, their daughter Janet (played by Lia Lee), and son Jung (played by Parker Kennedy). Additionally Rich, Mr. Lee, Mike, and Alex round out the show (all four characters played by Obadiah Freeman) - living in Toronto, Canada. Immigrant parents from Korea that run a convenience store that also live above the store. 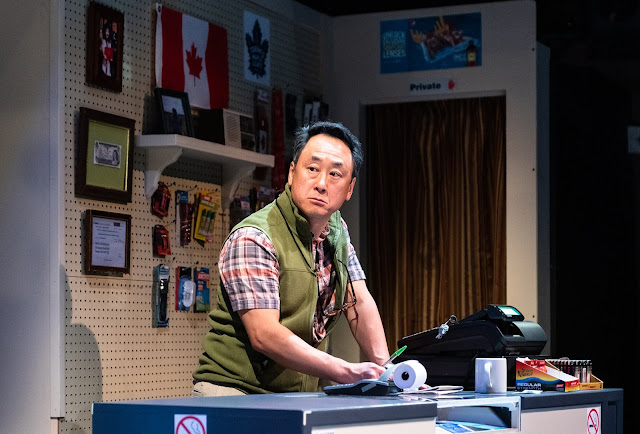 This story is, while uniquely Korean in some aspects, universal when it comes to the divide between immigrant parents and their (in this case) Canadian raised children. The cultural differences that spring up, work ethic, sacrifices, and lack of communication are just a few of the very common issues that immigrant families face when raising their children in a different country.

The anchor of the cast was definitely Appa. James Yi is familiar with the role having portrayed Appa in other productions up north in Canadian theatre. He was funny, timely, stern, and full of complexity in his portrayal of Appa. As soon as the show started, and he walked in to open up the store, you felt like you were outside on Greenwood Avenue going into a convenience store. He was the highlight of the cast and I couldn't take my eyes off of him.

Lia Lee as daughter Janet, a budding photographer, had the second most stage time of the family characters. Her constant disagreements with Appa were so spot on that they were hard to watch at times. If you’ve ever had a parent want one thing for you while you wanted something else, you'll relate to the scenes between Janet and Appa. Lia Lee did a fine job showcasing the differences between her character and Appa, being the young professional yearning to follow her dreams yet also feeling the responsibility and pressure from her family to follow their wishes. Again, it's something almost every young person goes through at some point in their life, even more so for immigrant families. And it's never easy. 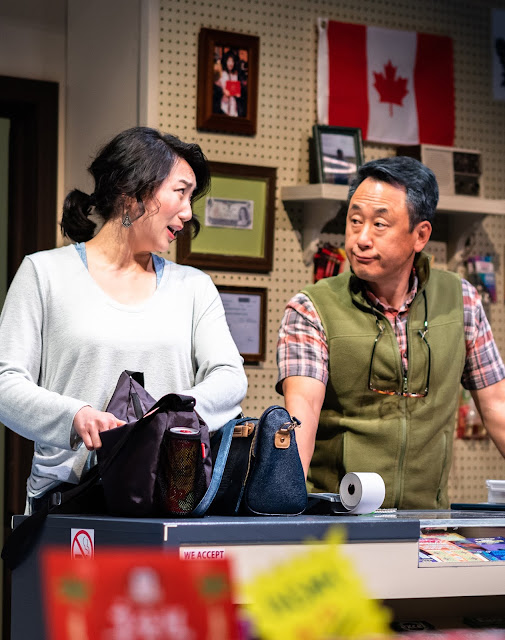 Umma as portrayed by Annie Yim had a smaller role than I thought the character would. Upon watching some of the television show after seeing the play, I then understood this is normal. I would of loved to have seen more of Annie in the role, as the scenes we did get with her were wonderful.

Estranged son Jung as played by Parker Kennedy was the one character that needed some work. No longer living with the family due to an altercation with Appa when he was a teen, he now has an infant son, a girlfriend that he fights with all the time, and a job he hates. While this set up the conclusion of the play that I won't spoil here, I found myself yearning for more emotion from the character. I didn't feel the pull, that moment when the actor crosses the line in order to take the audience along for an emotional ride - I wanted that so desperately but it never happened.

The four characters portrayed by Obadiah Freeman were fun to watch as each entered the store for different scenes. The scenes with Alex, Janet, and Appa were probably some of the most memorable. 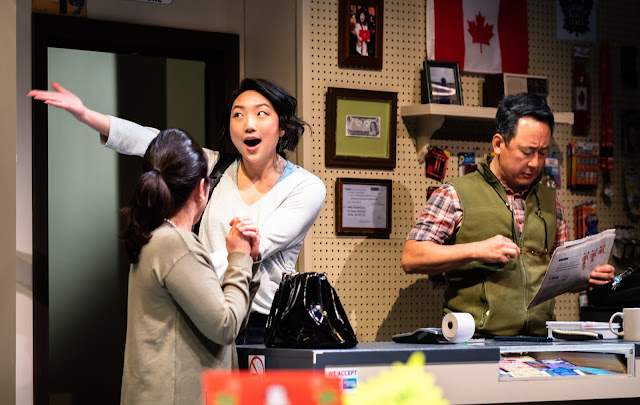 
Co-directed by David Hsieh and Scott Nolte, "Kim's Convenience" was as advertised - humorous, heartwarming, and truthful. I found myself laughing out loud at certain scenes and deathly quiet during others.

The cast worked well together but I wish the play were actually longer than the eighty or so minutes. There was definitely room to expand upon Appa and Umma's marriage as well as Janet and Umma's relationship.

The staging was wonderful as was the lighting design. I'm always amazed at how much creative variety takes place at the shows at Taproot Theatre. 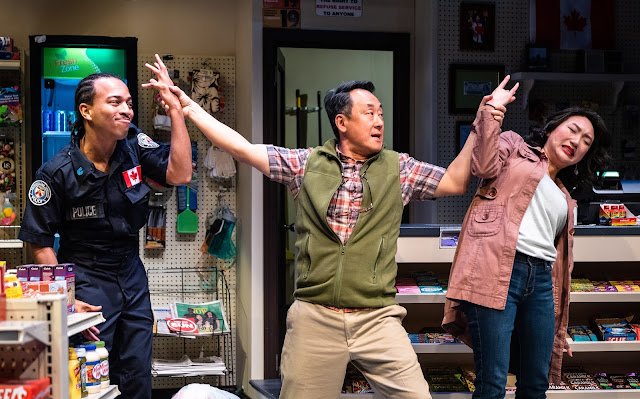 Overall, "Kim's Convenience" was a winner Saturday night. I am extremely happy to see a cast made up of nothing but people of color, created by a playwright of Korean descent.

There is so much back and forth in the theatre community about representation, equity, and, opportunity right now. For all of you out there that constantly write on social media about such issues, standing on your soapbox for all to hear, guess what? Here's your chance to show your actual support for the very issues you spout off about time and time again. Please let me know what your thoughts are on "Kim's Convenience" after you see it for yourself. I'm looking forward to our discussion.