THE CURIOUS INCIDENT OF THE DOG IN THE NIGHT - TIME Event Review! Village Theatre Everett 4/27/19

The Curious Incident Of The Dog In The Night - Time 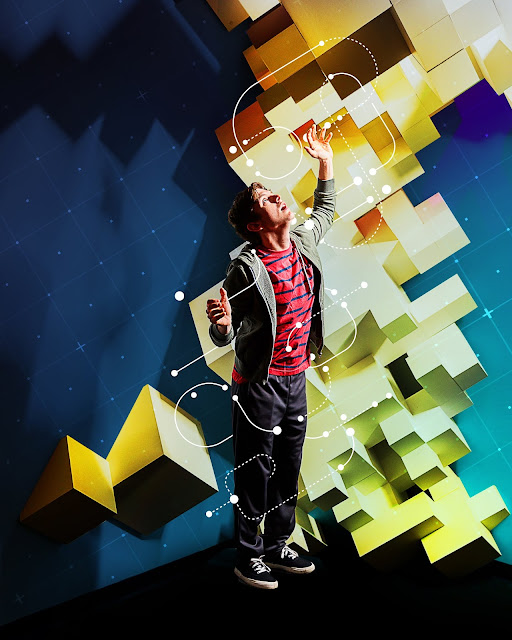 The Curious Incident of the Dog in the Night-Time pre-production photo.
© 2019 Mark Kitaoka
Property of Village Theatre.

It was with great pleasure that I was looking forward to reviewing "The Curious Incident Of The Dog In The Night - Time at the Village Theatre Everett. As some may know, due to some health issues, I had to postpone or cancel coverage of many shows in March and April. Thankfully I am nearly back to full strength and this show was the first - post health concerns - that I would be reviewing, and only my second show at the Village Theatre Everett.

I went into the show not knowing much about it. I knew it was based on a book and it centered on a fifteen year old boy and the murder of a dog. That was it. Now that I've seen it, I'm glad I didn't know more than that going in.

The show was a broad mix of contemporary presentation, neurodiverse sensitivity, and long standing theatre traditions.

Christopher - expertly played by Michael Krenning - is a teenager who sees the world differently. As the play develops it becomes clear that Christopher is neurodiverse (residing on the Autism spectrum). His father and mother have split up and one of Christopher's teachers is the only person who "gets" him. There is the case of the murdered dog but that is really more of an aside to the bigger picture.

As always I don't like to give too many plot details away, preferring the reader see the show for themselves. 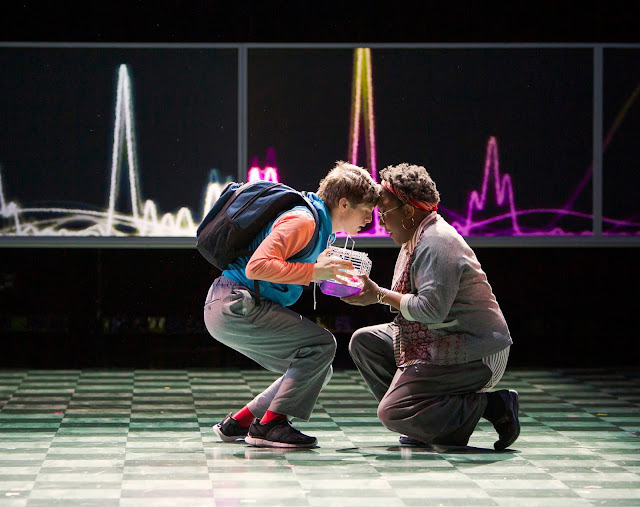 
I can honestly say I have not seen a show like this before. The lighting and scenic design were spectacular. They were somewhat reminiscent of the Seattle Opera's recent "R-evolution Of Steve Jobs" where technology, light, sound, and visuals were all carefully put together to elevate the show to another level.

As I stated earlier Michael Krenning was a marvel to behold. So much in character, so giving in his performance, one couldn't help but be drawn into his characters unique way of seeing the world.

James D. Sasser as Christopher's father Ed and Kathryn Van Meter as his mom Judy were also strong counterparts in Christopher's world. Their acting helped move the story along and to help create the all too common issues (such as impatience) when raising a child on the spectrum.

Jehan Osanylin as Siobhan was superb as Christopher's teacher. They became the voice, maybe even the conscious, of Christopher for the audience to further understand how Christopher saw the world. 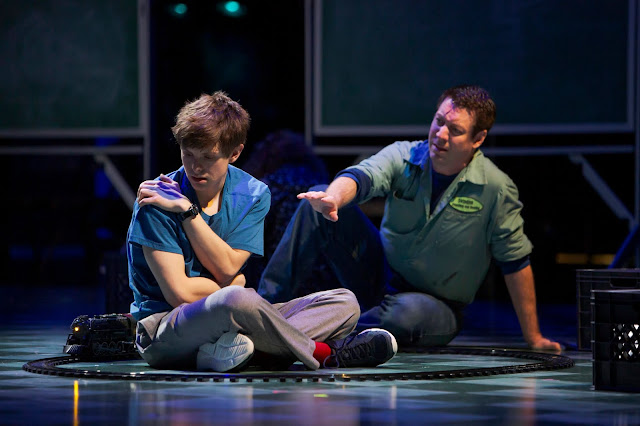 
The author of the book Mark Haddon has stated he never intended for Christopher to be a neurodiverse character. Moreso a character that saw the world differently, much like a large portion of the population does but is often ridiculed for it. He has also stated that he is not an expert on neurodiversity but revels in the fact that his book has opened the discussion around the world to such complex and much needed talks.

In the end, "The Curious Incident Of the Dog In The Night- Time" (taken from a Sherlock Holmes novel for those who are wondering) is not really about the killing of a dog. It is about how one young man sees the world in a unique way and how his family and the people he encounters learn more about themselves because of it.

This is something we all can learn from.

The show was confusing at first but heartwarming and food for thought by end of the second act. A wonderful production with no weak links whatsoever. "The Curious Incident Of The Dog In The Night - Time" will have you reevaluating how you look at the world and how you judge others before taking the time to understand their point of view.

Special Thanks: Ann for the credentials - thank you so much for the opportunity!

Posted by Eclectic Arts at 3:06 PM