The Addams Family
A New Musical 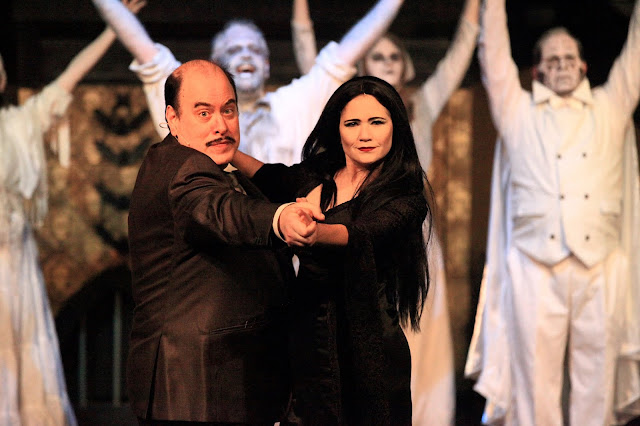 
As we approach a year of arts expansion coverage at Eclectic Arts, it is satisfying to say that we have learned so much in that time. We are looking forward to delving into even more coverage in the coming months.


"The Addams Family - A New Musical" opened this past weekend at the Edmonds Driftwood Players. Based on the loveable dark characters created by Charles Addams, I was ready to be carried away to the black humor and song of The Addams Family.


The staging was ambitious and set the tone for the show. A two-story set that reminded me of the inside of a dark castle, everything looked great.


Being a musical, there were going to be several songs in the show - make that many songs in the show. Doug Knoop as Gomez, Tamara Davis as Morticia, Megan Acuna as Wednesday, and Catherine Craig as Pugsley rounded out the immediate Addams Family cast members. Add in Jenny Price as Grandma, Jacob Livingston as Lurch, and Richard Wright as Fester, and you had quite a cast of Addams Family characters. 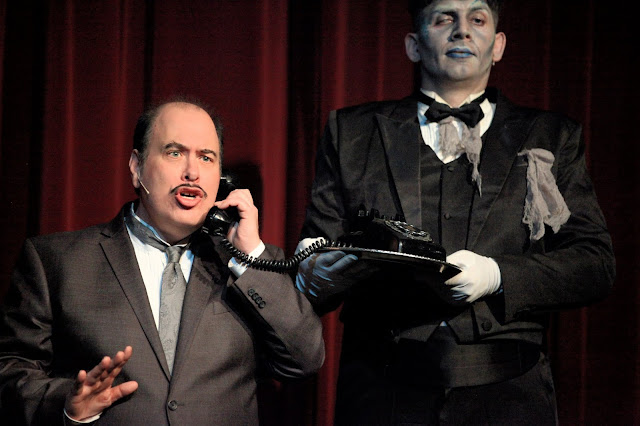 
There were also "normal" characters, which included David Naber as Lucas, Jeff Strom as Mal, and Hayley Baudrau Gaarde as Alice.


As if that weren't enough, there were also the Addams Family ancestors, which added up to ten different ghostly ancestors.


As always I tend to leave the plot details to the audience member so they can see the show as fresh as possible. In a simplistic way the show is about how Gomez and Morticia's daughter Wednesday is in love with a "normal" boy Lucas. The fall-out of such a relationship then creates comedy, drama, and other assorted storylines and emotions.


I have found that the various theatre companies in the area bring different things to the table. I can only compare it to seeing a minor league baseball game VS a major league one. Depending on what level of minor league game you see (rookie, short A, low or high A, double A, or triple A), the level of talent and sportsmanship will vary greatly. The theatre companies are similar.


I found with this show the talent varied greatly, which is to be expected I've learned. And with a musical it can vary even greater as you may have cast members who's strength is music moreso than acting and vice versa. Of course there are also some that excel in both areas.


I enjoyed Doug Knoop's Gomez. He was cavalier, dashing, and sly. Doting on his bride most of the time, I felt Mr. Knoop captured the spirit of Gomez Addams.


Megan Acuna stood out whenever she had a scene. Her acting showed depth and her voice really made me take notice. I understand she is new to the Seattle area. Here's hoping she is cast in more productions, as she is a talent I would love to see and hear more from. 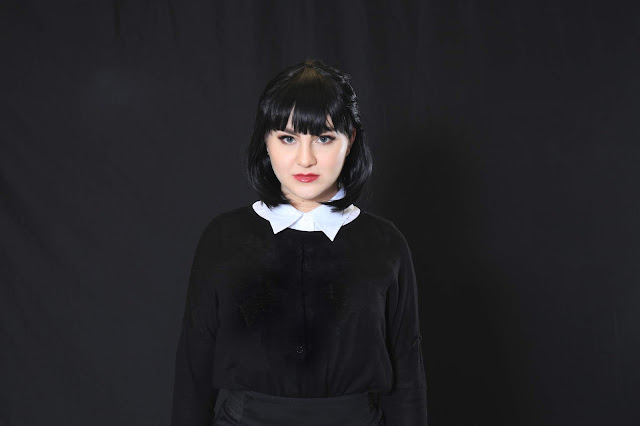 
I really liked Uncle Fester as portrayed by Richard Wright. His comedic timing was strong and he made Fester loveable and quirky in slight and wonderful ways.


Jacob Livingston was the pleasant surprise as Lurch at the end of the show. I won't ruin it for you dear readers but let's just say he can do more than utter noises.


The normalcy with a slight bent that David Naber brought to Lucas was also well done. His acting and voice work showed the training and experience of an actor that is on his way up.


Jenny Price as grandma Addams (or is she) was priceless. She made everything she did look easy.


Without going through every single actor, let me say that Hayley Baudrau Gaarde's voice was spectacular, Jeff Strom's acting showed veteran leadership, Tamara Davis looked and for the most part acted the part of Morticia. I would have loved a bit more of the sexy vamp side of the character, both in acting and voice, but she worked well with Doug Knoop's Gomez. Catherine Craig pulled off a devilishly good Pugsley - no mean feat considering she was the youngest member on the stage. 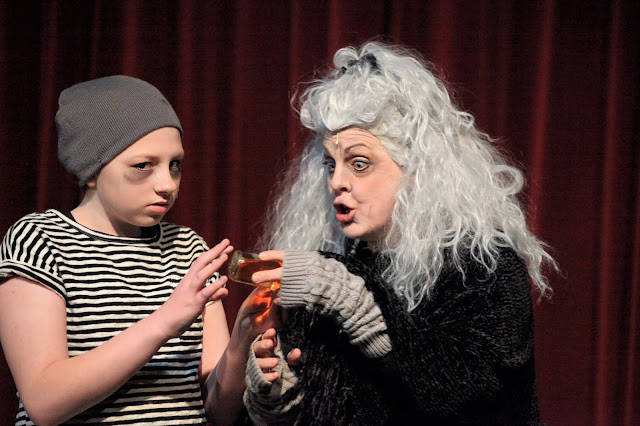 
The ancestors reminded me of something out of "The Frighteners" or even "Thriller". The amount of choreography and song was definitely noticeable throughout the show. Not just for the ancestors but for all the characters. I can only imagine how long rehearsals were to pull this show off. Not to mention the band as well. Whew! A ton of work!


Overall, the show was fun. It was a bit long considering the simple plot device but it was still enjoyable. The show runs through May 5th and is a perfect vehicle for families, "normal" and strange alike!