I started off 2017 with a death in the family. I ended it with a funeral of a family friend on 12/29/17. There were other personal losses during the year but there were also some amazing positives, too.


I will never forget how Eclectic Arts started and what it has become. An incredible amount of work goes into doing all of this but it is my passion. I am forever grateful that any publicist, manager, band member, etc, gives me the time of day. It's all rather surreal when I think about it.


Of course certain events are always going to stand out in my mind from 2017. I in no way want to discount the other artists that I covered. Again, I am grateful for every opportunity I've been afforded.


But as a random end of the year list - here goes: 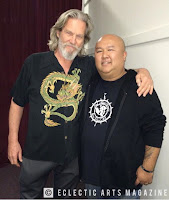 *Olivia Newton John. Just typing that is beyond humbling to me. I grew up with her music and films. To be able to meet her and talk with her briefly after her performance in February was definitely a highlight.


*Diamanda Galas. Wow - here I am ten months later after her show at The Neptune and I still can't quite fully comprehend her performance that night. It's like I've been musically scarred for life in the best possible way.


*Maggie Koerner. This petite gal from the south that has this HUGE voice! Interviewing Maggie and then listening to her perform - such a talent. I hope I get another chance to see her up here some day.


*Thunderpussy. I finally got to meet Ruby (drummer) at the Elysian Search Party event in July. She ended up meeting most of my immediate family, too, including my mom. She is now adopted into our family from that day forward. I also attended the show in West Seattle this summer. It's nice to be remembered - as Whitney knew my name. Molly smiles at me like she recognizes me (probably due to my big bulbous head). And that band on stage is just rock and roll goodness. The New Year's Eve gig was just over the top incredible!


*Black Metal. There were several black metal shows that came to town that helped reinforce why I love this genre of music so much. Mayhem, Marduk, Archgoat, UADA, Inquisition, Belphegor, and others practiced their blackened arts in Seattle this year. Hails!


*Ace Frehley. KISS was the band that started me on this journey. Being able to photograph Ace from the pit was just as surreal as can be. It didn't really hit me until after the show that I just shot Ace fucking Frehley.


*Karin Konoval. I've watched all three of the recent Planet of The Apes films. To be able to interview this wonderful actress who played "Maurice" in all three of the films was a delight. I really hope to expand this part of Eclectic Arts in 2018 (film related coverage).


*AL1CE. A warm smile comes to my face when I think about my time with this incredible band of musicians and people. The way they treated me one would think I was a long time fan/friend of the band. I was as new to them as they were to me. Not any more. ☺

Their shows in September really spun my energy in a different direction that impacted my life in more ways than one.


Other shows such as MUNA, Katie Kuffel, Tobias The Owl, Letters From The Fire, gosh it just goes on and on.


The non-music events such as the three beer festivals I covered (rediscovering my love of craft beer). Attending Luche Libre Volcanica and doing my interview with La Avispa was great fun. Sitting down and finally interviewing Reis from The Box and Burger Eatery was a long time in the making. So glad that finally happened!


For 2018 expect my continued push into covering and bringing anything I consider artistic and interesting to Eclectic Arts. I already have two interviews lined up and shows as well for January and beyond.


I thank you for your support over the years. It is much appreciated!